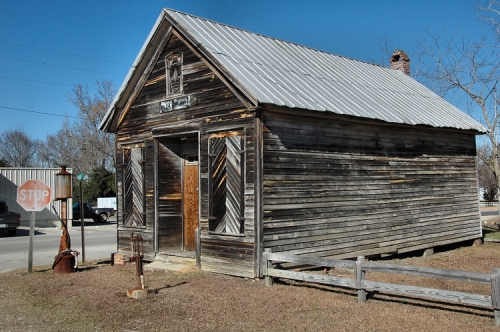 This is one of four identical structures which once faced Railroad Street. It’s the only one that remains and served as the office and pharmacy of Dr. J. A. Stewart. Two additional structures of identical construction were built by Dr. Stewart’s cousin, C. W. Caldwell. Stewart (1880-1952), a native of Crawfordville,  came to Bulloch County upon graduating from the Medical College of Georgia in 1906 and quickly became involved in nearly every aspect of its civic life. While boarding with the Kitchings family, in 1907, he met and married their daughter, Sarah. He served on the first city council in Portal and remained one of the town’s biggest boosters for the remainder of his life. A much more detailed biography of Dr. Stewart can be found on the National Register Nomination Form.

In their nomination of the pharmacy to their 2015 Places in Peril list, the Georgia Trust for Historic Preservation noted: (This) small wooden building served as a pharmacy, doctor’s office and soda fountain over the years, and Dr. Stewart was known to do surgery in the back of the drugstore while his wife tended the soda fountain in the front. Though the drugstore closed in 1950, its interior remains largely intact. With medical books and instruments, stocked shelves and the soda fountain still inside, this is perhaps the most thorough and authentic example of an early community pharmacy in the entire state.

On 8 August 2011, Joe Brack wrote: My father’s family was from Portal, the Bracks. Dr.Stewart was my uncle’s father and in the mid to late 40’s and early 50’s he still traveled around the county by horse and buggy and many times paid with either produce or live stock when he was paid at all. Uncle Punk ran a beer and fish market next door and of course being the 40’s it had separate entrances for blacks and whites. We would visit Uncle Punk and get a Nee High soda… fond memories.