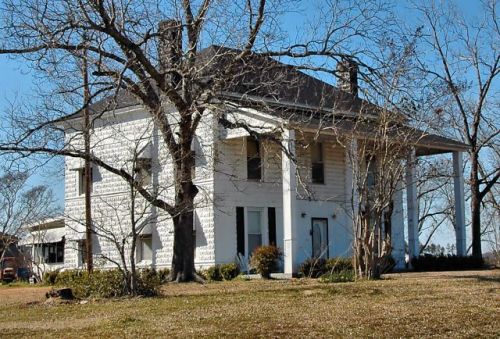 Thanks to this excellent history of the house from William Carroll, it’s clear that this house has had numerous owners in its nearly 110-year history. I’m using the name of the first and last owners, as they occupied it the longest. Mr. Carroll writes: The Old Bond Place was said to have been built in 1908 by a family named Bond. The house was built as a twin or “sister” to a house in Fitzgerald, at 513 North Merrimac Drive and was owned by John Bond’s brother. The textured block the house is built of was said to have been formed from the sand in the yard. A mold was built in the yard. Blocks were formed or molded there, baked, and set to build the house.The exterior of the house has been routinely painted white trimmed in black with a black roof. In the 1990’s the roof was replaced. At that time no previous roofing was found. It is assumed that the roof at one point was tin, though today it is black shingle. The house’s original design  was square with a 10×10 protrusion outward from the front of the house. The house included four fireplaces down stairs and four upstairs. The house had a balcony, which sat atop the 10×10 protrusion, and two external staircases, one on the south side of the house and one on the east-facing front of the house leading down from the balcony.
In 1920 the house was occupied by Mr. John Bond. The census record reported that the property was owned by Mr. Bond without a mortgage. In 1930 Flora I. Bond lived in the house with her son, Eslie F. Bond and was widowed. In 1940 Mrs. Bond was living in the house with a son, Walter and his wife, Mattie. According to the census record the property was worth $1500 making it one of the most expensive properties in the Vaughn District of Ben Hill County.

In 1948 Will and Fannie Lee lived in the Old Bond Place. During his occupation Will and his wife lived on the first floor. On the second floor lived, for a time, his son Albert, along with Albert’s wife, Hollyce and their two daughters. At one point in the house’s history it was owned by the Shinholster family. It was rented by the Wilkerson family on occasion and by Bobby Reeves on another occasion. Spence Walker owned the house during that time.

In 1961 Henry Carroll purchased the house and two hundred acres from Fred Moore. Mr. Moore was a timber-man from Vienna, GA. Mr. Carroll purchased the house and land for $3,000.00 a year for a period of 30 years at a rate of 3%. Upon his occupation he installed paneled walls, kitchen cabinets, a back porch, and a carport. Henry Carroll removed the balcony on the front of the house, the 10×10 protrusion, and the external staircases. He repaired the front porch roof, took up an inferior concrete slab, and poured a superior concrete base for the front porch. Mr. Carroll later sealed the eight fireplaces, removing one of the chimneys, and installed propane space heaters throughout the house. Mr. Carroll made the Old Bond Place part of a larger farm. He built a shop and a series of barns, and had modern grain storage installed. Prior to these improvements the land surrounding the Old Bond Place had a series of older, simpler farm stands. There was a horse barn near to the house, just the other side of the driveway. There was an outhouse away from the house. Mr. Carroll improved the water supply by having a deeper well dug and by building four irrigation ponds on his farm. Prior to this improvement previous owners had first drawn water from the creek which borders the property. Later they drew water from a simple well in the ground nearby. Later still a well had been dug and water pumped electrically to the house. In 1992 Brad Carroll, Henry’s son, bought the farm and house. It was at this time that a new roof was installed. The house remained occupied until 2013.Today the house has three bedrooms upstairs and one down stairs. At the time of construction indoor plumbing was unheard of. Today the house contains two bathrooms added at some unknown time in its past. Additionally, downstairs there is a sitting room, a small foyer, a large living room and a large kitchen.