Pollution on the Altamaha River

Thanks to Constance Riggins and Deborah Sheppard at Altamaha Riverkeeper, I recently made a flight over the Altamaha River on a mission to photograph Paddle Georgia participants kayaking the stretch of the river near the Rayonier mill in Jesup. Rayonier is a vital part of the economy of the entire Wayne County area, but regardless of their protection by DNR and EPD, state agencies charged with enforcement of established standards, they continue to pollute the air and the river.

Relaxed enforcement due in part to politics and in part to economic woes has begun to show on our rivers and waterways. Look no further than King America in Screven County for evidence of this trend: discharge from their facility into the Ogeechee River culminated in the deaths of over 35,000 fish last year.

Paddle Georgia, the Georgia River Network, and Altamaha Riverkeeper aren’t a bunch of fringe environmentalists hellbent on shutting down facilities and interfering with good businesses, but rather they’re normal people who care more about the earth’s future than they do about minimization of profits. They come from all socioeconomic backgrounds and their politics run the spectrum. They all love rivers.  It’s strange to me how when I was growing up, Southerners made fun of the Rust Belt cities up north for not caring about their resources and for being such bad stewards of God’s earth. I saw the South as being above that sort of irresponsibility but the bad economy has forced businesses and government agencies charged with protection of natural resources into a “deal with the devil”. It’s clear that the powers that be are choosing jobs and the immediate economy over the long-term health of the environment and how that will effect the lives and well-being of future generations.

I was hesitant to post these photographs, as I’m not on some sort of mission to smear Rayonier or the government, but I think it’s time everyday people made their voices heard. When someone accuses you of caring more about rivers than you care about the ability of people to make a living, just say it’s not about choosing one over the other. It’s about balancing the two in a way that gives a damn about this messy world we’re leaving behind. 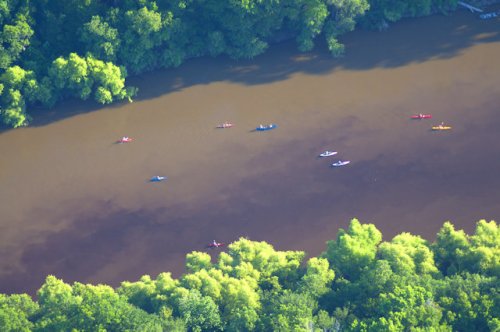 The image above, showing Paddle Georgia participants making their way through the Rayonier discharge near Doctortown in Wayne County, was published on the front page of the Savannah Morning News, 23 June 2012.

8 responses to “Pollution on the Altamaha River”