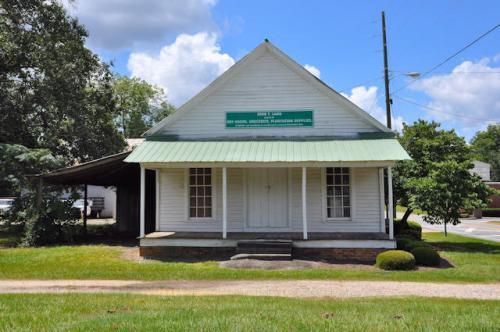 As the modern sign on this nicely restored structure notes: John T. Land sold anything that might be needed in a small farming community like Allentown: Dry Goods. Groceries. Plantation Supplies. Elizabeth Copeman writes: John T. Land lived from 1846-1918. He built the store pictured above in the early 1880s. The attic of the store served as the living quarters for Mr. Land until he built his residence in Allentown around 1888. The building was acquired on September 20, 1897 by the merchant firm of Wade and Meadows. Peter Meadows acquired sole ownership of the property in 1901 and continued operating it as a mercantile store. Peter Meadows gave the property as a security deed to Adams Brothers Company, a grocery supplier from Macon. In 1916, the Adams Brothers Company sold the property to Sarah Payne, wife of Joseph Dickens. In 1946, the property was included in a land parcel sold by the Dickens heirs to James Ellijah Davis and A.T. Land, Sr. In 1950, the building was being used as a mercantile store by Samuel Meredith King and his nephew John Oscar Adams. King and Adams operated a rolling store from this site. This building and the Allen house are the oldest remaining structures in Allentown.