In early November I received a nice message from California musician Amy Hogan: I found your images on the web a few years ago…(Victorian Farmhouse, Bethlehem Road) stayed in my mind and being a song writer I express a lot through my music.  I recently won an award for a song I wrote titled “Abandoned Houses” and thought you might like to hear what your art inspired. Not long after I heard from Amy, I was rambling around Wayne County one foggy morning and rephotographed the house that inspired the song. Not long after I initially posted this I heard from Glenn M. Bray, whose grandparents, Harry A. & Blanche Burns lived here from 1953 until very recently. I had been trying to identify it for about three years.

The original shot of the house follows, but first, please listen to Amy’s beautiful song. I think you’ll like it as much as I did. 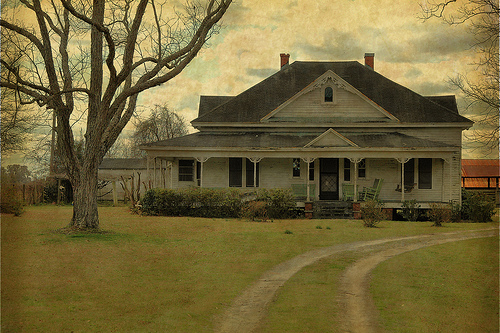 Though not actually abandoned, the house has had a rustic appearance for a long time. Of course, that was its charm. It was recently purchased and will soon be restored.