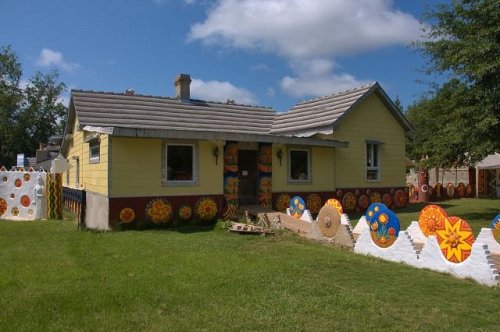 This 1885 vernacular farmhouse brought Eddie Owens Martin back to Marion County in the mid-1950s and helped forever change the artscape of Georgia. But of course, there’s more to the story.  As evidenced by the Pasaquoyan totems which greet visitors at the front door, Martin didn’t consider this place on par with the backwoods landscape that cradled it. Rather, it was a universe all its own and his life’s work was the manifestation of that mythology.

Eddie Owens Martin was born on 4 July 1908 to poor white sharecroppers Julius Roe and Lydia Pearl Martin. In 1922, to escape the rural life and his father’s abuse, he left and eventually settled in New York City. In the mid-1930s, Martin had a high fever which resulted in a series of visions in which three “people of the future” from a place called Pasaquan selected him to depict a peaceful future for human beings. After receiving these visions, Martin began using the name St. EOM (pronounced Ohm), EOM being the acronym for Eddie Owens Martin. He spent another two decades in New York, waiting tables and telling fortunes. Upon his mother’s death in 1950, Martin was willed this house and the surrounding acreage. He returned a few years later and set about creating the Land of Pasaquan, as foretold in his earlier visions. 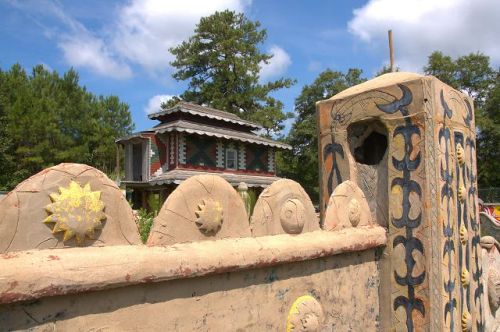 This visionary universe was literally created from the ground up, with St. EOM and the occasional assistant pouring concrete walls and creating eclectic outbuildings. Martin was an eccentric above all else and in a small town where most people were wearing jeans and overalls, his brightly colored flowing robes and long hair and beard, worn in varying styles, were a bit out of place. He was a celebrated fortune teller, as well, and Debbie Brazil recalls: “Went there many times with my Mama, for him to tell her fortune. The yard would be full of cars from Georgia, Florida, Alabama, and one Sunday I remember one from Lousiana. Folks came from all around to see him.”  This suggests that he had a wide circle of associates who visited Pasaquan from time to time. Locals have said that he was tolerated because he helped keep some of the local stores in business buying so much material for Pasaquan. Other than a few friends and associates, he never quite fit in. His art received little attention in his lifetime. He committed suicide in 1986 and bequeathed Pasaquan to the Marion County Historical Society. A great profile from Tom Patterson, who literally wrote the book on St. EOM, can be found at Bomb Magazine. Subsequently, thanks in large part to the work of folklorist and documentarian Fred Fussell, a group known as Friends of Pasaquan was established to perpetuate Martin’s legacy. I’d like to personally thank Fred for pointing me in the right direction as to this photo project, as well. 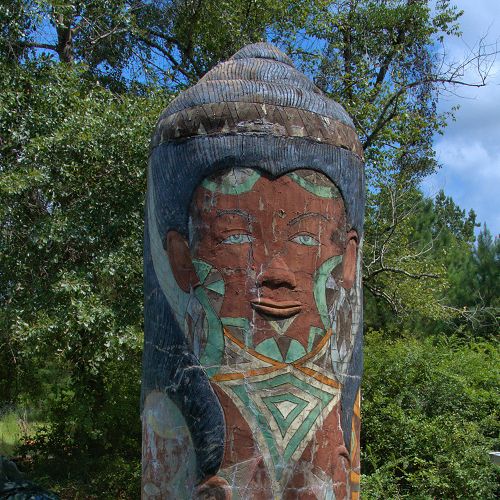 Even with the active involvement of the Friends of Pasaquan, the intervening years haven’t been kind to the place St. EOM left behind. Weather and time have taken their toll. But now, thanks to the generous involvement of the Kohler Foundation, the fading paint and cracking concrete (as seen on the totem above) that were beginning to threaten the very existence of this place, are being stabilized and given new life by a team of art conservators, assisted by art students from Columbus State University under the direction of professor Mike McFalls. 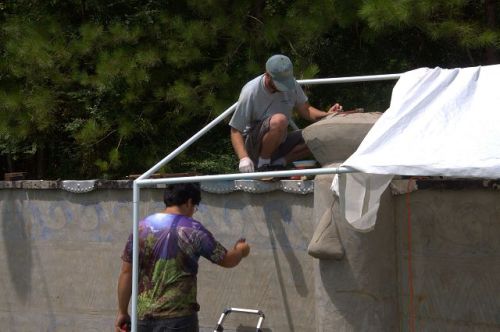 Upon completion of the project, the Kohler Foundation will gift the site to Columbus State University (CSU) which will oversee it. The vast majority of St. EOM’s archival drawings, paintings and sculpture, long housed here, have already been transferred to CSU. 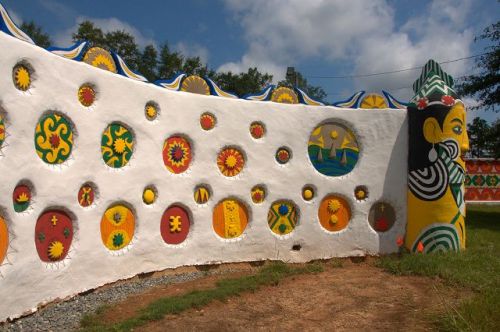 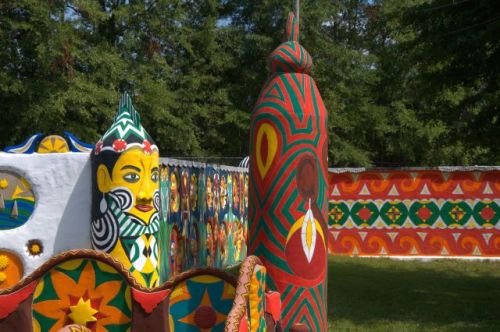 Art restorer John Salhus from Parma Conservation in Chicago has been the primary paint conservationist. Here’s a totem he’s working on that really illustrates the scope of the project. Note that one side is painted and the other, with concrete stabilization evident, is still bare. 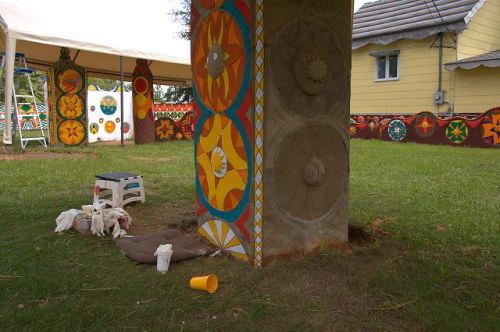 Shane Winter, from International Artifacts in Houston, has been painstakingly leading the concrete stabilization and reconstruction. 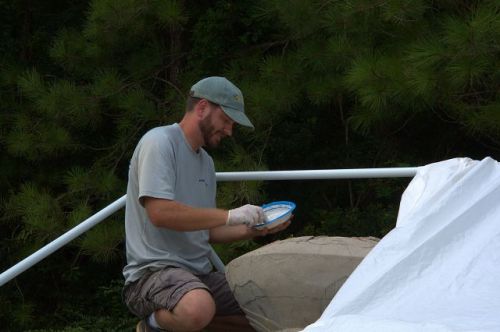 The pagoda, set atop concrete piers, is the first and last thing you see at Pasaquan. It’s a highly unusual form in these parts. 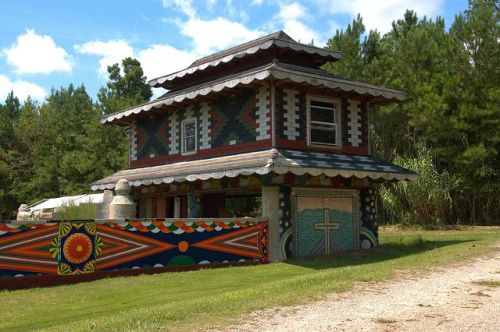 The mural of the cross is particularly eye-catching. It’s centered on a wall depicting the galaxy (some galaxy) beneath colored circles of tin. The scalloped pressed tin is a recurring theme at Pasaquan. 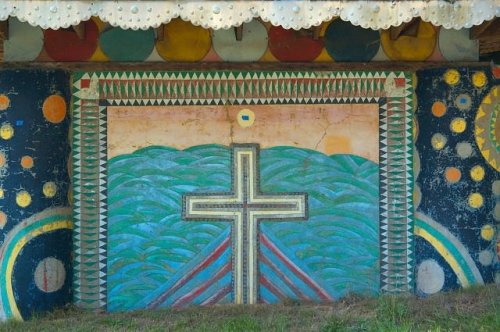 Erika Nelson, an art conservator based in Lucas, Kansas, has been busy documenting every inch of the pagoda before restoration can begin. Erika is an independent artist and educator who has traveled around the country championining Outsider artists and the environments they create, as well as seeking new material for her own whimsical creation, the World’s Largest Collection of the World’s Smallest Versions of the World’s Largest Things. 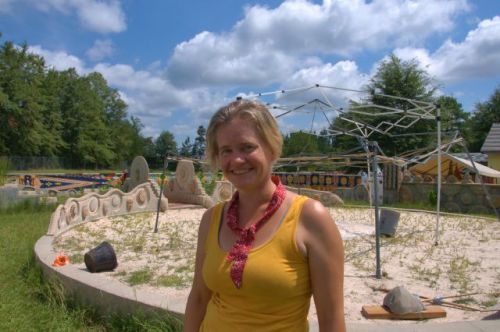 The pagoda is located beside what was essentially Eddie Martin’s sand box, a ceremonial space where he often did mystical dances. 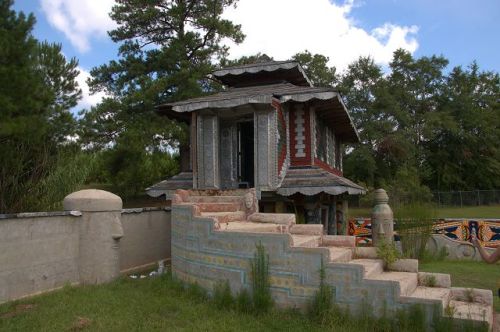 This visually complex meditation space is located directly behind the main house. 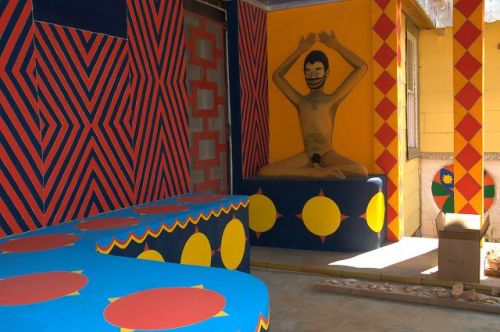 It incorporates mandalas inside and out, so it was likely a temple or altar room by St. EOM’s imagining. 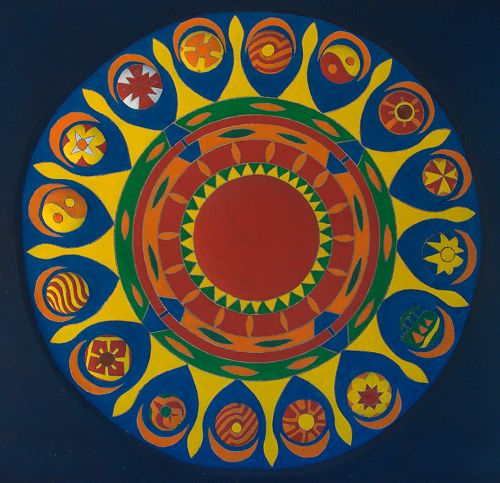 Here it is from the outside, just as fascinating. That’s John Salhus, in the far distance, meticulously painting the wall. 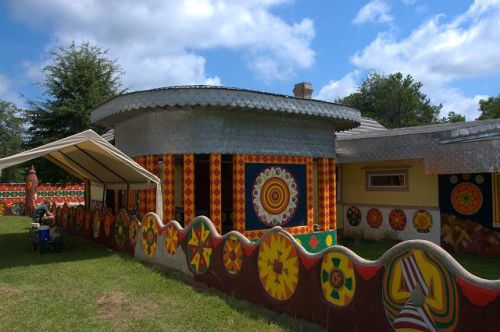 To the rear of the main house is this whimsical space, which St. EOM used as his studio. 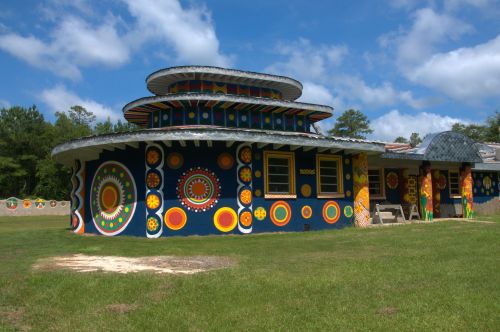 This entryway contains nearly all the elements that can be found throughout the grounds. 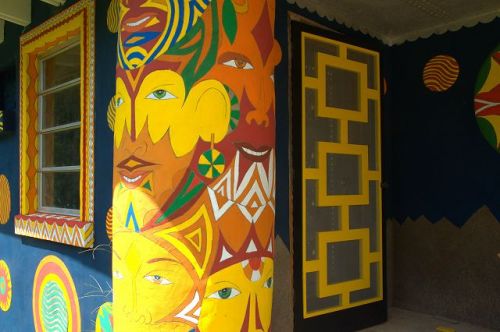 A unique chimney serves as a visual anchor between the studio and main house. 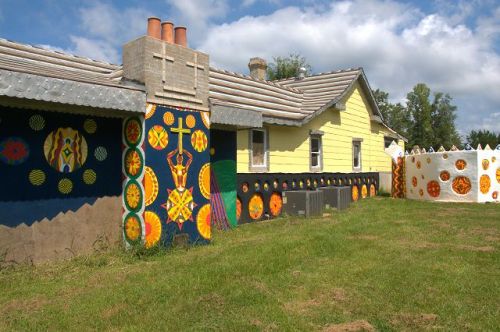 The area leads around the side of the house toward the carport, connected by more of St. EOM’s whimsical walls. 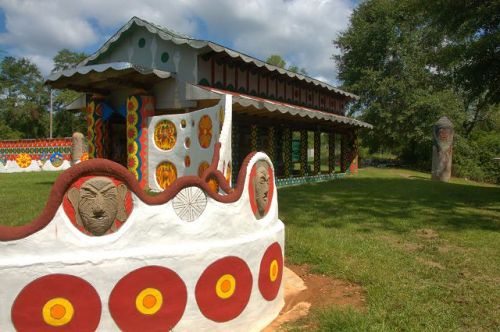 In a small valley just to the right is a temple that hasn’t been completely restored. 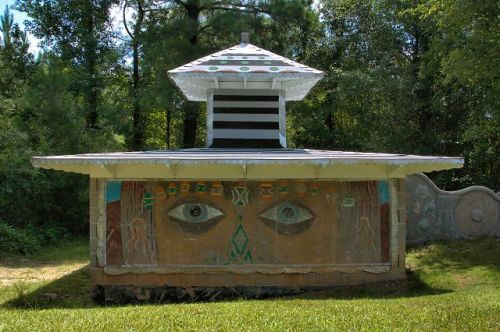 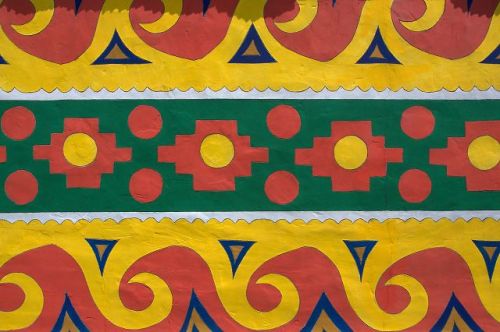 This wall medallion features a Pasaquoyan in a “gravity suit”. Watch out for the folks from Ancient Aliens. They’ll make a connection… 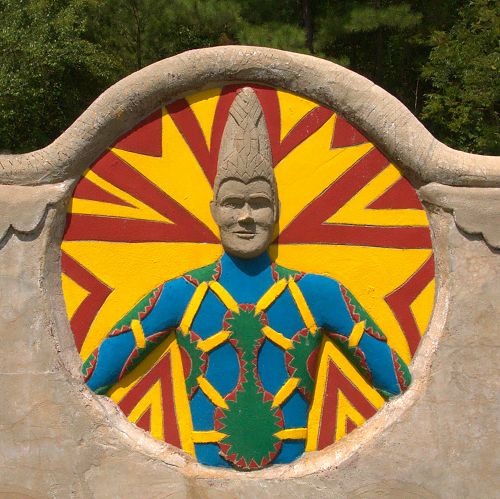 One section of wall is topped with snake sculptures. I’ve read that locals (children, mostly, I suppose) believed that St. EOM had a herd of trained rattlesnakes who acted as his protectors. 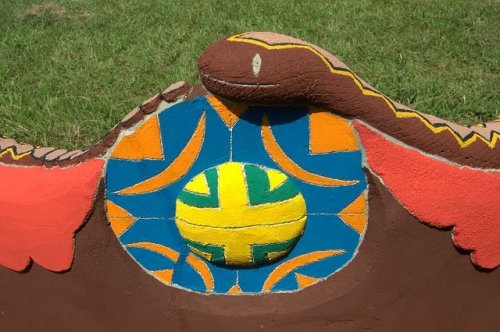 And here’s my favorite from a section of wall containing colorful depictions of Pasaquoyans. 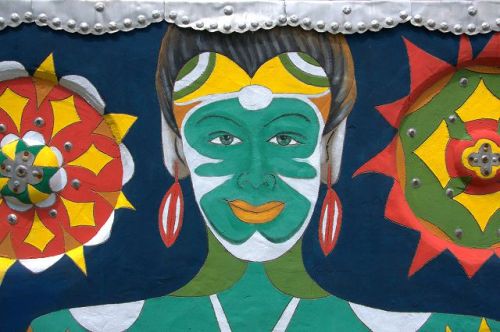