I’ve photographed this house many times; it’s an iconic vernacular style, popular in the late 19th and early 20th centuries throughout the rural south. This one retains its original kitchen (later enclosed) but as you can see from the side view, the whole structure is in dire condition. I was delighted to finally learn more about it from Hilda Baxter Tootle: This house was built around 1870 or 1880. My father, the 10th child, was born on Nov 3, 1904. My grandfather, Wiley Washington Baxter built it. Married Pauline Sikes and had 11 children. The house was given to my father, Lathen Leland Baxter, the youngest son. He married Gussie Brannen Baxter. They had 3 daughters. Etwinda Baxter Rogers, Twins, Wilda Baxter Fields and Hilda Baxter Tootle. The house was later sold and you see what happened to it. The house had a master bedroom, living room, 3 more bedrooms, dining room, kitchen and a pantry. A long porch enclosed. 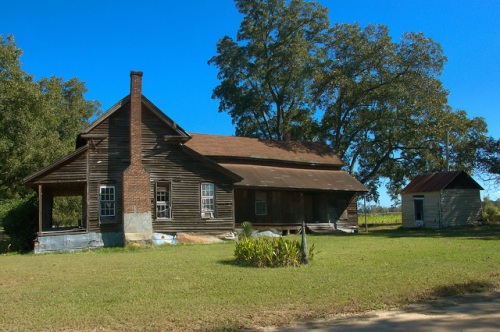