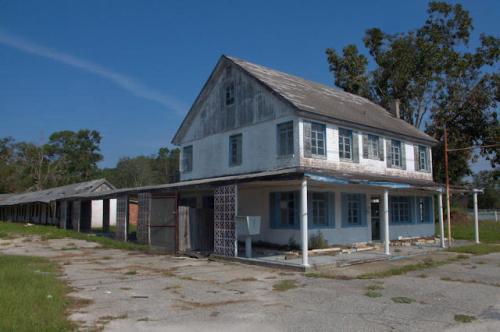 This is one of a few survivors of numerous motels located in and near Jesup on US 301, mostly from the 1940s-1960s. I believe it was last used as apartments. The two story building was a lounge and coffee shop (the upstairs was an office and/or residence). Carol C. Harper writes: In its heyday, when 301 was a main thoroughfare, this was “Camellia Courts”, a popular motel owned and operated by Curtis and Mabel Harper of Jesup. The Harpers were my husband’s uncle and aunt. The motel offered a restaurant, swimming pool, and beautiful camellias cultivated by Mabel and shared with guests.

A 1949 postcard from my collection also lists R. L. Harper as an owner of the property at the time. It was later known as the Mary Ann Motel.