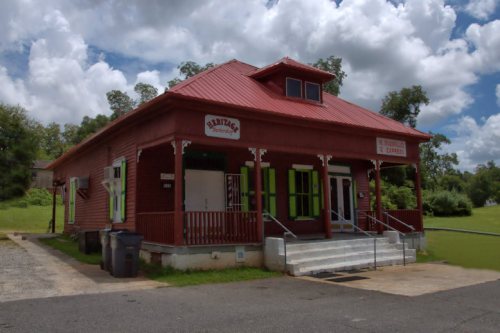 Built as a grocery store in 1899 by Joseph H. Dismuke, this structure also served his family as a residence. Dismuke was the nephew of Elbert Head, a well-to-do black farmer and philanthropist, from whom he initially acquired the property. It was sold to Janice Coleman in 1919 and briefly owned by W. C. Flatt before being purchased in 1922 by John Minyard, who added a cafe. The cafe was so popular, especially on weekends and special occasions when it sold alcohol, that the neighborhood came to be known as”Minyard’s Bottom”. The Minyards got out of the business by the 1950s and Earnest Wilson, then his son Clyde, ran a barbershop here until Clyde’s illness in 1978.

These memories come from Karl Wilson’s (Clyde’s son) “History of the Storehouse”, written in 1985.

[The storehouse was originally located about 20 feet closer to the corner of the lot but was moved during infrastructural modifications in the neighborhood in 1987].