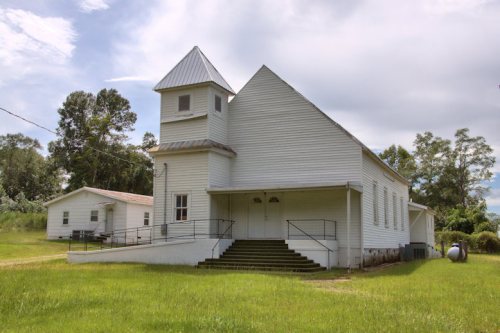 Ms. Baker, a mother of three, was forced into a sexual relationship with her elderly white employer, Ernest B. Knight. It was well-known and frowned upon throughout the county. When Knight realized that Ms. Baker was determined to end the relationship he locked her in his gristmill, as he had done many times before. When she tried to escape, they “tussled” over his pistol which fired and killed him. She immediately turned herself in and claimed the shooting was in self-defense. Not surprisingly, the all-male, all-white jury in the ensuing sham trial found Ms. Baker guilty of capital murder and sentenced her to death. She was executed at Reidsville on 5 March 1945 and buried at Mt. Vernon. That this was a tragic, if typical, miscarriage of justice was confirmed when she was granted a full and unconditional pardon by the state in 2005.

Church members placed a headstone on her unmarked grave in 1998 and family members pay tribute every year on Mother’s Day.

As to the history of the congregation, I’m unable to locate anything at this time.