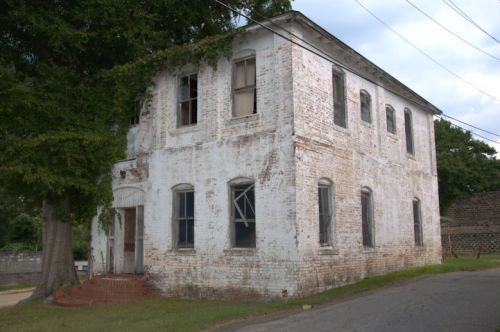 Conversations with several people in Screven County have led me to identify this as the old county jail. It was replaced in the 1930s or 1940s by a newer structure and the date of this one is unknown but likely late-19th early-20th century. Dale Reddick writes: The observation about the second story trap door placed in the floor really does suggest this was a jail and also a hanging facility (if necessary), when the open field public hanging space further along W.T. Sharpe Drive couldn’t be used. Rabun Alex Lee, Larry Waters, and I had some ‘fun’ pulling up the history of this building. There’s a very similar structure found less than a quarter-mile distant. Perhaps the same designer/ builder constructed both. These structures most probably were built following Sylvania’s Great Fire of 1897 when many new brick structures were erected.

It was also used as apartments in the mid-20th century.