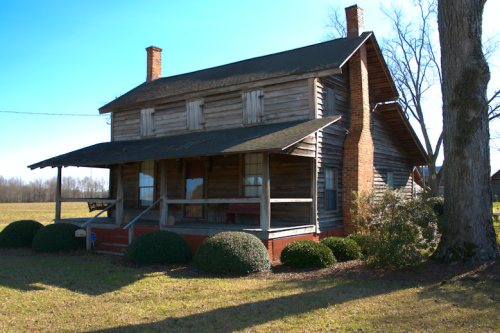 In Houses of Heart Pine: A Survey of the Antebellum Architecture of Evans County, Georgia (3rd printing, 2014), Pharris DeLoach Johnson notes that this house*, one of the oldest in the county, originated  circa 1856 as a single pen log structure joined by full-dovetail notches. It was later expanded to the Plantation Plain style it now exhibits (probably within a decade of its original construction) and weatherboards were added. The house was lowered slightly during a later renovation which was necessitated by replacement of the original chimneys. The roof and windows were also replaced but the original log walls and interior architectural features remain strongly intact.

James Bell Smith (1823-1891), whose mother Fannie Bell was the namesake of Bellville, purchased this property from Benjamin Brewton in 1851. His family came to Georgia from North Carolina after the Revolutionary War, settling in the 1820s in the section of Tattnall County that later became Evans County.  Upon his death in 1891, the house was inherited by his son, Pulaski Sikes Smith. When Sikes died in 1894, his widow Mary Eliza Tippins Smith continued to reside in the house. Later, Sikes’s daughter Helen Daniel acquired the undivided land holdings of her siblings, including the house. Helen sold the house and surrounding land to her son Walter Emmett Daniel in 1954, and they own the property to this day. It is presently used as a guest house.

*-also known as the Smith-Daniel House