Irwin County entrepreneur Wright Tomberlin Paulk (1873-1922) built the Aldine Hotel [pronounced al-dean] circa 1904, to capitalize on the rapid growth of the recently settled”Old Soldier’s Colony” at Fitzgerald. He named it for his daughter, who died at the age of eighteen months in 1898. In its early days it was one of the leading hotels of the city and was later modified for use as a retail space for various businesses. I recall a Fred’s Store being located here when I was a child in the late 1970s and early 1980s. As the above photograph shows, the front of the structure was sided with inappropriate concrete veneer at some point. 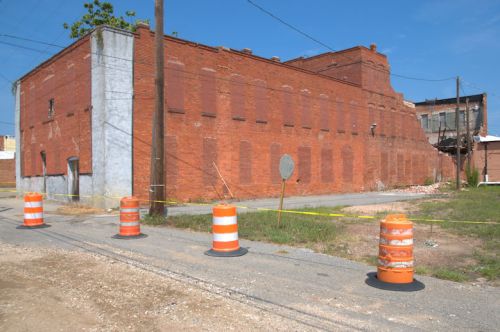 The original hotel was three stories; I believe this rear section was a later addition.

The structure had been abandoned and neglected for many years and in the past year or so bricks began to collapse into the adjacent alley, creating a serious liability and hazard. Sadly, this is the fate of far too many commercial structures in small towns all over Georgia.

As of October 2020, the property has been cleared.