Marion County is likely unique in that it has two antebellum courthouses still standing, this one and the one at Tazewell. The brick for this courthouse was fired locally. A remodel in the 1890s transformed it from a plain vernacular appearance to its present Neoclassical style. It was modernized in the 1960s. 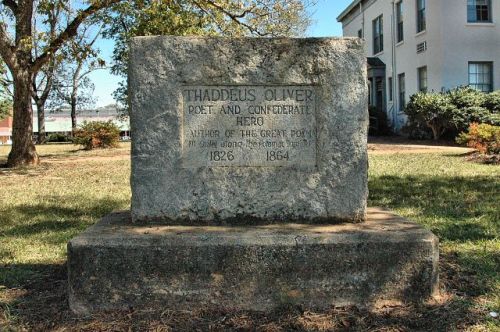 There is a second confederate monument on the lawn. Though his claim to sole authorship of the famed Civil War poem and song, “All Quiet Along the Potomac Tonight” is now disputed, Thaddeus Oliver (b. 25 December 1826 in Twiggs County) remains one of Georgia’s favorite Confederate sons. In 1850 he went to Marion County and taught at the Buena Vista Academy, was admitted to the bar in 1852, and was serving as Solicitor General of the Chattahoochee Circuit when he mustered into Confederate service on 15 April 1861. He died of wounds in a Charleston hospital on 21 August 1864.  His famous poem was purportedly written at Aqula Creek, Virginia, in August 1861. He is buried about ten miles west of Hawkinsville (Georgia Highway 26 at Loggins Road).

Located on the grounds of the historic courthouse, Marion County’s confederate monument was dedicated by Mrs. Minnie S. Weaver, local UDC Chairman, on 23 August 1916. A crowd of over 2,000 came out to hear the Honorable W. B. Short and Lucian Lamar Knight deliver the keynote addresses. This was the last Confederate monument dedicated in Georgia in the Confederate commemoration era. The 12-foot-high ornamental bench, known as an exedra, is unique among Georgia’s official monuments.

These are located just down the street from Clements Hardware and Marion Drugs.

This is one of the most beautiful buildings in Buena Vista. I’m hoping some of these great old commercial buildings will someday be placed on the National Register of Historic Places.

The building on the left served for many years as Marion Drugs. The Charles M. Clements building is on the right. It served as a hardware and furniture store as well as the local undertaker. Downtown Buena Vista is nice little town with generally well-preserved early 20th century commercial storefronts, dominated by one of Georgia’s older courthouses in the center of the square. Below is the Clements Hardware Store from the side, showing its old Coca-Cola mural. 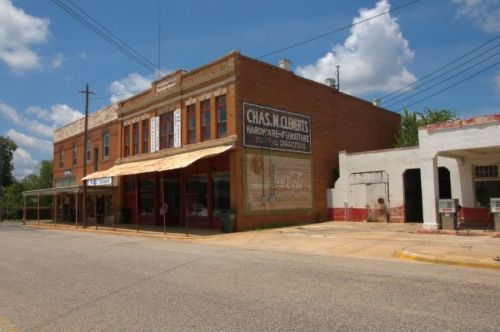 This early 7Up mural was originally painted by Jimmy Bush in 1946. It was repainted by Signs by Norm of Dallas, Texas in 1992.