This home was built by Samuel Rumph for his mother. Rumph was the father of the commercial peach industry in Georgia. His home in nearby Marshallville is a well-known landmark. It’s more commonly known today as the Windham house. 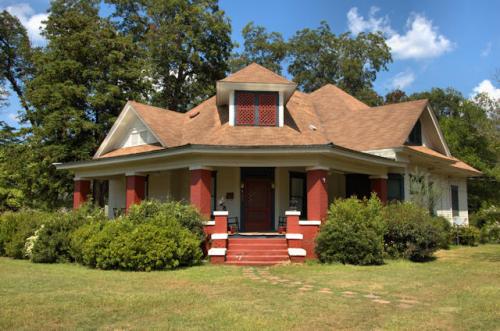 This historic depots is one of the largest in South Georgia.

Though there is some debate as to its specific use, this is thought to be one of  few remaining interlocking/signal towers in Georgia. At this time, it can only be confirmed that a telegraph office was located on the second floor and the Van Roy Restaurant on the first floor. I’m not sure as to the date of construction but I would guess 1910s.

This structure, built as a grist mill around 1895, has most recently been known as the Jolly Nut Company. Established in 1934, t’s one of the oldest specialty produce businesses in the area.

The Austin has an interesting history. It was built as a dry goods store around the turn of the last century. George H. Slappey added the second floor auditorium after he purchased it in 1915.  Upon Mr. Slappey’s death in 1934, the theater was sold to the Martin-Thompson chain and its named was changed to the Peach Theater.  The Peach went out of business in 1968 and after years of general disrepair and disuse, the county supported its renovation in 1999. It’s used for local cultural events and has been rechristened the Austin, though it doesn’t have seats or a screen anymore. While I think it’s wonderful that they did such a great restoration of the exterior, it seems unfortunate that it’s not a theater anymore,  in the truest sense of the word.