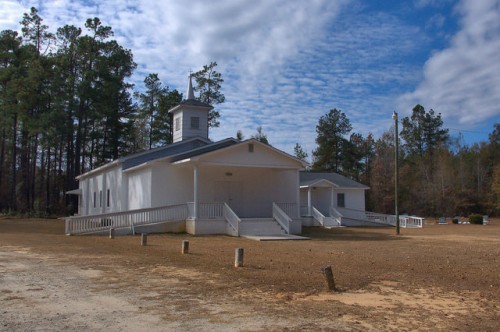 Like many older African-American congregations, St. Clair Missionary Baptist utilizes a new church building but retains an older facility on the property (below). Note the baptismal pool to the right.

This is one of the best maintained and neatest little country churches I’ve ever seen in Georgia. It was built by Charles Clark as a plantation church to serve the spiritual needs of his large family. He was married twice and had 25 children. The Methodist Episcopal affiliation came in 1878, as the family spread out and left the plantation, but they resumed care for it in the late 1970s, after membership dwindled.

Charles Clark came to Savannah from Westfield, New Jersey in 1802 and married his first wife, Eleanor Carswell, there. As his interests in agriculture grew, they acquired plantation lands in Burke County and resettled here. Upon Eleanor’s death in 1826, Clark married Sarah Murphey. A memorial outside the church reads: In Memory of Charles Clark (Jan. 30, 1782 – Feb. 2, 1852) Who in 1847 built Clark’s Chapel Church upon these rocks. He now lies buried in the family cemetery 1 1/2 miles away.

It’s thought that this church was built by David Demarest, the architect of Old Mercer Chapel in Penfield and the Greene County Courthouse in Greensboro. It certainly harkens to his mastery of Greek Revival architecture. The congregation of Hopeful Baptist dates to 1815, when a church was organized on the lands of Alexander Carswell’s plantation. Three smaller less formal churches predate this structure. The pulpit is at the entrance to the church, in contrast to the layout of most houses of worship. A member told me that this was to insure that every congregant would interact with the preacher. A small section at the rear was used as seating for slaves. 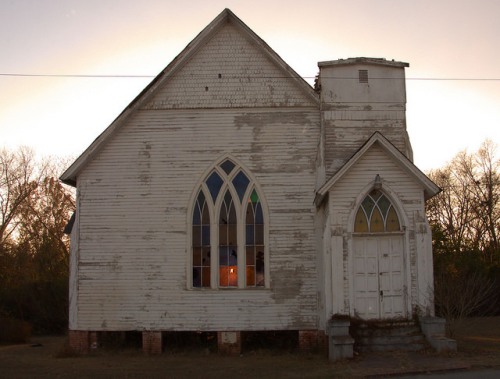 Burke County freedmen organized Haven Academy in 1868 and after operating the school and church in a more utilitarian structure for 20 years, completed the present church building in 1891. It’s an important example of early formal architecture in the Georgia African-American community.

Despite the positive attention brought to it by a National Register designation in 1996, it remains highly endangered.

UPDATE: At 2:00 yesterday (16 September 2017) Sarah Barber sent me a  message that this church was on fire. Rob White confirms: This Waynesboro icon burned and was completely destroyed on September 16, 2017. There are now only 2 sites in Waynesboro on the National Historic Register. I was very concerned about the future of this structure the last time I saw it and now the worst possible end has come to it. The Augusta Chronicle reports that it was a case of arson.