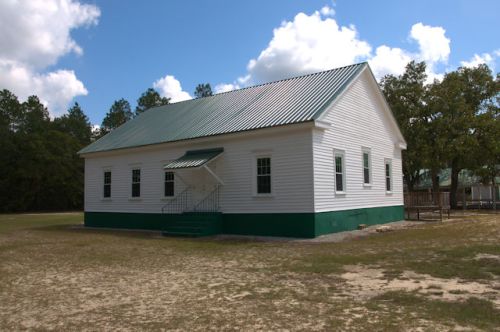 Replacing the original log church built around 1847, the present meeting house of Anderson Primitive Baptist Church is thought to date to the mid-1880s. Organized by Tattnall County pioneer Peter Anderson, the congregation, like many in rural areas, went through periods of great growth only to dwindle to low membership as members died and moved away. (Andersons alone make up nearly ten percent of the 1000+ burials in its historic cemetery). Luckily, a revival of the congregation resulted in what is today one of Tattnall County’s most active historic congregations to this day.  It’s among the most beautiful of the Primitive Baptist church yards I’ve encountered. 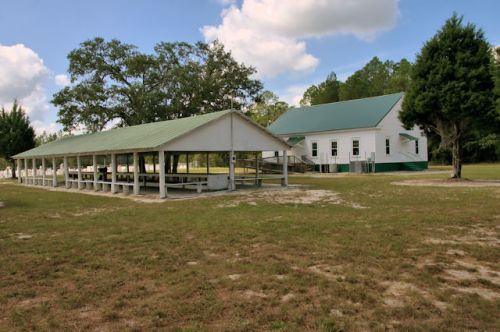 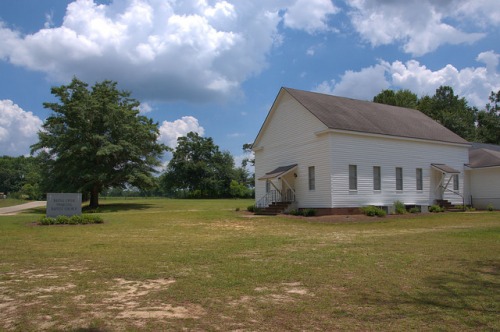 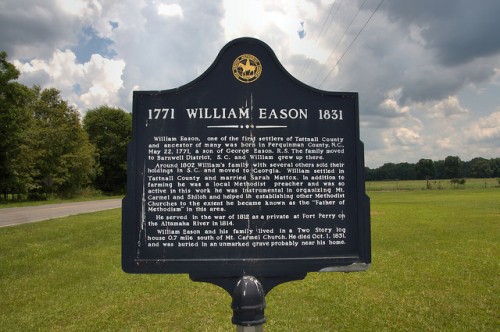 William Eason (22 May 1771 – 1 October 1831) , one of the first settlers of Tattnall County and ancestor of many was born in Perquinman County, N. C., May 22, 1771, a son of George Eason, R. S. The family moved to Barnwell District, S. C., and William grew up there. Around 1802 William’s family with several others sold their holdings in S. C. and moved to Georgia. William settled in Tattnall County and married Sarah Mattox (3 December 1777 – 16 May 1859). In addition to farming he was a local Methodist preacher and was so effective in this work he was instrumental in organizing Mt. Carmel and Shiloh and helped in establishing other Methodist Churches to the extent he became known as the “Father of Methodism” in this area. He served in the War of 1812 as a private at Fort Perry on the Altamaha River in 184. William Eason and his family lived in a two-story log house 0.7 miles south of Mt. Carmel Church. He died Oct. 1, 1831 and was buried in a unmarked grave probably near his house. 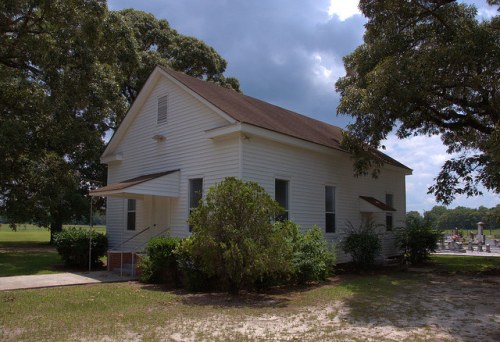 Mt. Carmel is the oldest church in Tattnall County. It was founded by pioneer settler William Eason in 1808. A “Methodist Memorial” in front of the little chapel was placed in 1908 to honor of the centennial of the congregation and the memory of William & Sarah Mattox Eason. I’m unsure as to the date of construction of the present structure. 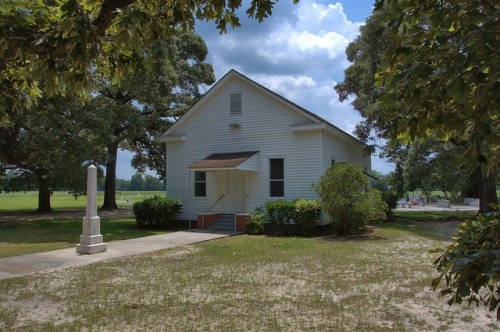 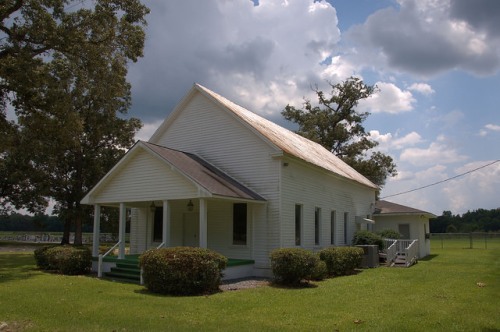 This church is located next to Mt. Carmel Methodist. 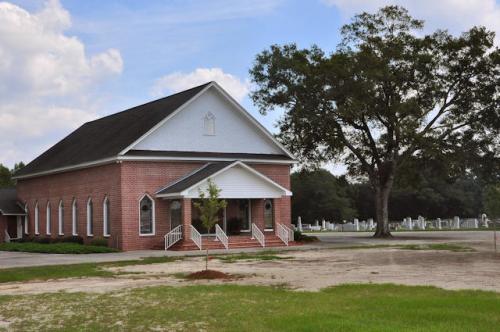 From the historic marker erected in 2000: This church was constituted and its first sanctuary built in 1888 on “Love’s Old Field”, land donated by G. M. Love. Charter members were the J. J. Kicklighters, the Dennis Lynns, Allen Lynn, and D. B. Smith, the church’s first clerk. Elders on the constituting presbytery were H. B. Wilkerson, Bazil Jones, and M. F. Stubbs, the first pastor. In 1896 the church was one of seven organizing members of the Bethel Primitive Baptist Association. J. Walter Hendricks, pastor from 1932-43, became the first president of Birdwood College, now Thomas College, in Thomasville.  This c. 1930 sanctuary was remodeled in the 1960s. 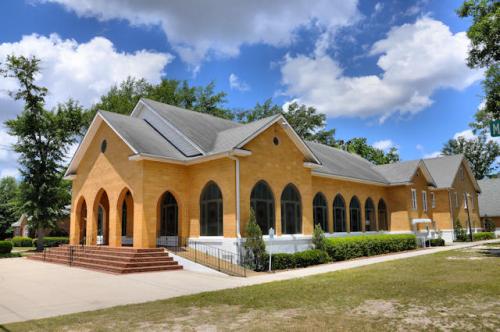 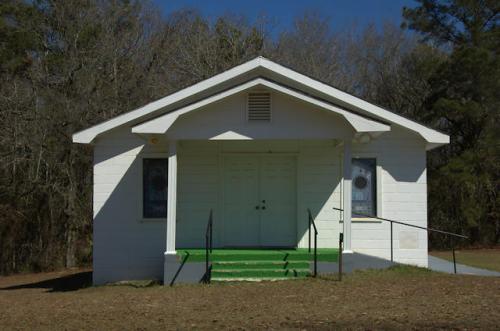 This church was organized in 1877. The first church was  a wood frame building, erected in the year of organization.

I first photographed this church three years ago. It’s located near the old Employee’s Clubhouse of the Rogers State Prison (formerly known as the Georgia State Penitentiary). The building is presently owned by my good friends, Janisse Ray and Raven Waters, who are leading an effort to save it for future generations. Janisse is best known for her writing (Ecology of a Cracker Childhood; Wild Card Quilt; Drifting into Darien, among others), but she’s also a champion of community and for giving rural communities a voice they might not otherwise have. 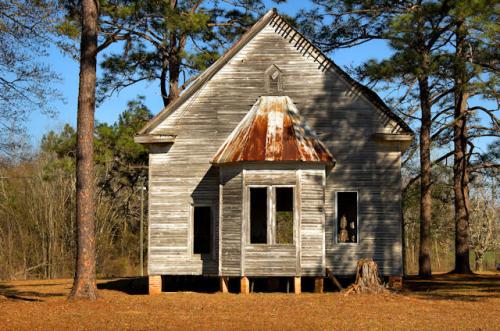 Repairing the roof is the most crucial fix that’s needed now, as structural damage is becoming a real danger to the integrity of the structure. Cedar Grove was abandoned in 1975 and though efforts were made to revive it in the early 1980s, there just weren’t enough members to do so.

Thanks to Peggy Anderson and Laurinda Norris for the identification and information. 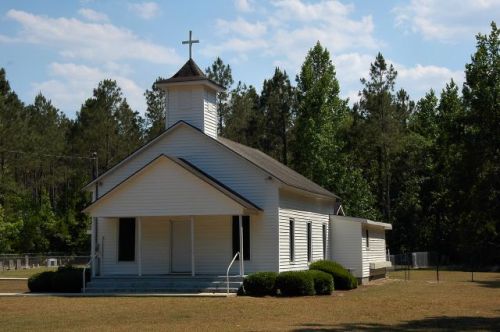 The South Georgia Conference of the United Methodist Church notes: The Hopewell Methodist Church grew out of a prayer meeting conducted by Mother Stafford.  Ezekiel Safford and his wife, Mary Jane, were born in South Carolina around 1800.  Near 1825, they came to Georgia and settled on the banks of the Altamaha River, six miles from the nearest neighbor.  Ezekiel was an infidel.  Mother Stafford was raised an orphan, but her early training was decidedly Christian.  She saw the religious needs of her distant neighbors and began prayer services among them…Eventually, Ezekiel was converted and joined the church.  A log (church) home was built in 1860, and the present building in 1890…A sign at the church notes that it was established in 1817. That date seems to be in conflict with the history provided by the South Georgia Conference, but the new information may be based on more recent research.

On the first Sunday in September, since 1955, they have held the Edward Anderson Reunion, in memory of J. Miller Anderson, Mamie A. Dasher, and others of the church who have passed away.