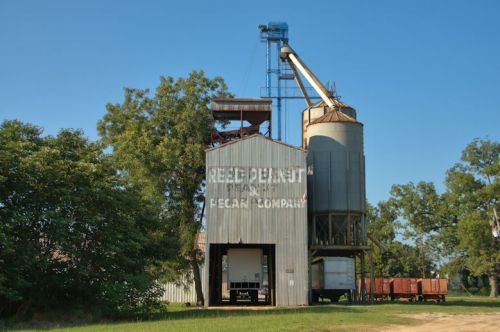 Site of the Original Stuckey’s, 1937, Eastman 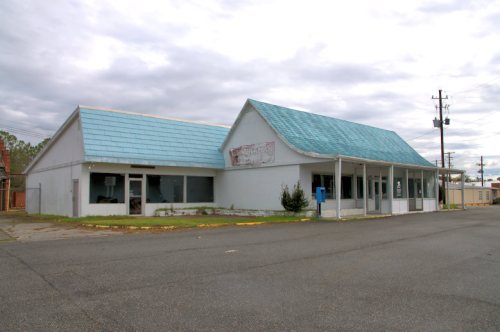 This structure, located on the site of Williamson S. Stuckey, Sr.’s (1909-1977) original roadside stand, has the familiar teal blue roof that was a beacon to tourists throughout America from the 1940s until the 1970s. I’m  not sure as to the date of this structure, but it’s probably from the 1940s or 1950s. The Stuckey’s Candy Factory, built in 1948, is located on the property, as well.

In 1937, Mr. Stuckey had a bumper crop of pecans and opened a roadside stand to sell them to the many tourists who passed through town on busy US 23. His wife, Ethel Mullis Stuckey (1909-1991), concocted a rolled pecan confection which quickly became Stuckey’s most iconic treat, the Pecan Log Roll (some love them, some not so much, but their impact on the business can’t be understated). While pecans and pecan-based treats were always the focus, Mr. Stuckey realized that travelers wanted more, and soon added other confections, a restaurant, souvenirs, and gasoline service.

By the late 1960s, there were over 350 Stuckey’s franchises throughout the United States, and their teal blue roofs were as iconic then as McDonald’s golden arches are today. The family sold the business to Pet Milk in 1967, but the focus became more corporate and less personal and changing travel patterns saw the rise of other roadside businesses that were quite competitive. From 1967-1977, Williamson (Billy) Stuckey, Jr., served five terms in the U. S. Congress. In 1985, determined to see his family name return to national prominence, Mr. Stuckey and a group of investors bought back the family business from Pet Milk. Though the familiar Stuckey’s locations of yesterday are no longer in operation, the brand remains strong and store-within-store locations are once again found throughout the eastern United States. In 2019, Stephanie Stuckey took over as CEO with plans of expanding even more, insuring the Stuckey’s name will be known well into the 21st century. 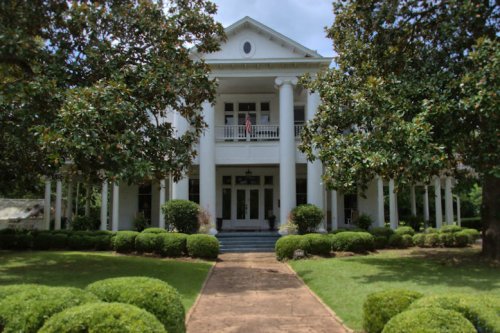 For well over a century a pecan tree planted on this property in 1848 was memorialized as “The Mother of Georgia’s Pecan Industry”. The seed nut was brought from Texas by Mrs. Taylor’s mother. A Colonial style house built for the Taylor family originally stood here, but was replaced by this structure. 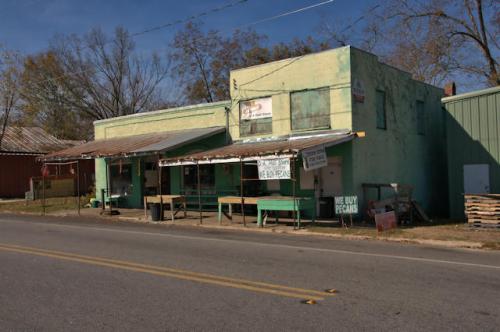 The O. A. Hall Store opened in 1929 and was operated by Mrs. Hall for many years. In fact, it’s better known as the Mrs. O. A. Hall Store. It’s the oldest in Emanuel County. Though no longer a general store, the business is still in operation as a pecan buying point and agricultural supply. I spoke with the son-in-law of the present owner who’s a grandson of O. A. Hall, and he related that the business is still profitable though it’s changed with the times. He said the biggest item in the store today is pine straw twine. 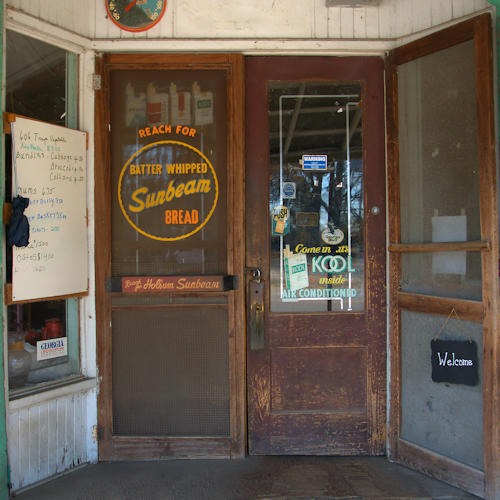 Diane Hall Pritchard writes: O A Hall Store was opened in 1929 by my grandparents Ottis & Georgia Hall. My Daddy Ottis Jr”Bud” worked there as well. Daddy took over after the death of my grandfather in early 1960’s. My grandmother continued working at store until her health declined. Daddy continued running store and was later joined by his brother George and my mother Madolyn. Daddy passed away in 2015 and Mama passed away in 2018. My uncle George continues to keep our family business running. 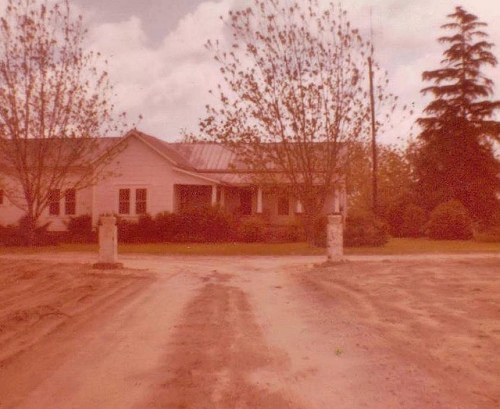 For the Christmas season I thought I’d share this image, circa 1960, of the farmhouse where my father grew up in Ben Hill County. Bricks were added to the house later. The beautiful cedar on the right of the house is long gone, but I remember it.  And the two saplings in the front yard are pecan trees, much larger now and still productive. I can still see my great-grandmother, active well into her late 90s, rocking on the front porch while we played in the front yard. I was amazed by how many people remembered buying peaches from my family in the 1960s. 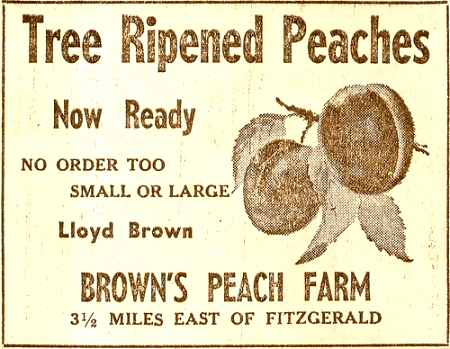 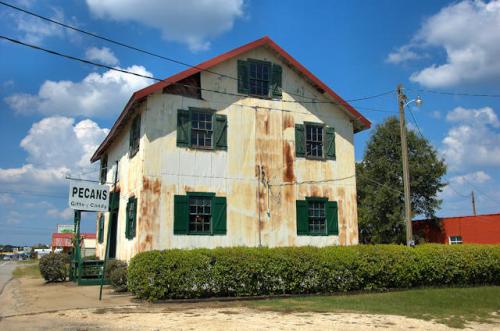 This structure, built as a grist mill around 1895, has most recently been known as the Jolly Nut Company. Established in 1934, t’s one of the oldest specialty produce businesses in the area. 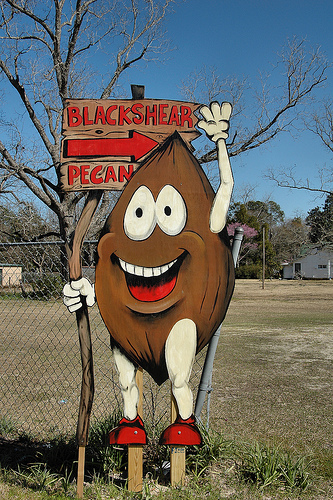 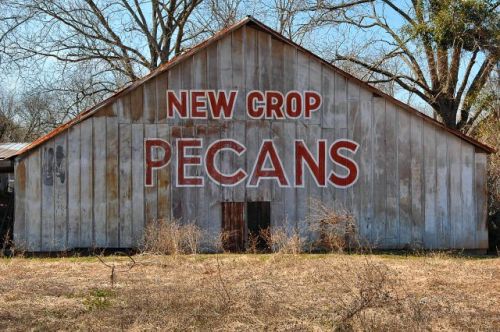 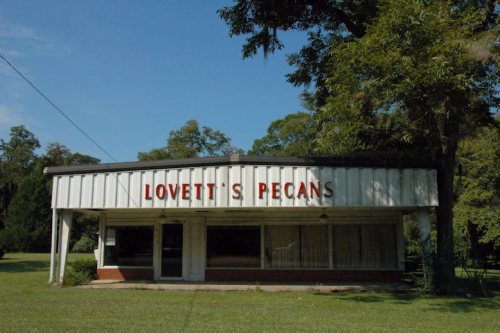 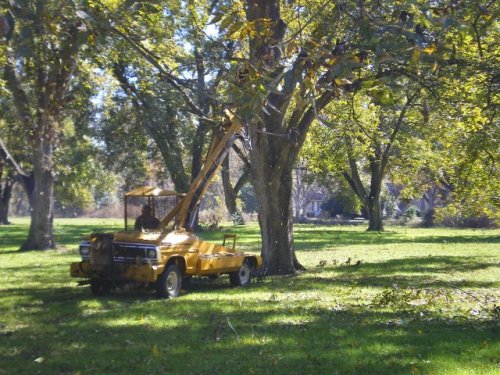