Here’s a different view of one of my favorite places. Most folks just call it the Lumber City bridge, or the Lumber City trestle, but it’s an amazing survivor and no doubt a landmark for many travelers. It’s still in use.

The site of a historic ferry on the Ocmulgee, this landing now provides public access to the river. It’s truly one of the most appealing areas on the river, just upstream from the confluence with the Oconee and the beginning of the Altamaha River.

Rock outcrops common to the Altamaha Formation are found here as they are in other parts of the county.

Jesse M. Bookhardt recently shared this about Burkett’s Ferry: Burkett’s Ferry is a wonderful place and occupies a special place in my memory. Located in Jeff Davis County just off the old Pioneer Tallahassee Trail, it represents one of several ferries that provided river crossing services. Though not in operation during my time, I remember the site well. Folks from the neighboring communities such as Snipesville often went there fishing, boating, and picnicking. There existed a small spring of cool clear water that seeped from a bank just up stream from the landing. From this pool of fresh water, many fishermen and visitors to the river stopped to drink. It is unknown to me whether the spring still runs or has succumbed to the dynamic forces of nature. Burkett’s Ferry was one of two closely geographically connect fishing spots. Nearby is Pike Creek recorded as Pipe Creek in the original land survey of the area. Both places provided rich fishing waters. Perhaps the “Pipe” referred to a site for making Native American tobacco medicine pipes. Obviously Native Americans once occupied the Burkett’s Ferry site, for in the 1950s when I was a kid, I found pottery and stone artifacts. During the pioneer period, the ferry connected Telfair with Ocmulgeeville, and further to the east Holmesville, the county seat of Appling. When the original plan was made for the old Macon and Brunswick Railroad, it called for the route to cross the Ocmulgee near Burkett’s Ferry. Later the plan was changed and the railroad was scheduled to be built across the Ocmulgee at Lumber City further down stream. Burkett’s Ferry is historically significant to the Ocmulgee and Wiregrass region for it provided much needed access to the hinterland of South Georgia.

Montgomery Lake is an oxbow of the Ocmulgee River. A mile or so before you reach the Ocmulgee Water Trail sign for Montgomery Lake & Stave’s Landing, driving north on Georgia Highway 117 from Jacksonville to Lumber City,  there’s a Georgia Historic Marker which gives this beautiful but nondescript place mythical status among sportsmen.

Approximately two miles from this spot, on June 2, 1932, George W. Perry, a 19-year old farm boy, caught what was to become America`s most famous fish. The twenty-two pound four ounce Largemouth Bass (Micropterus salmoldes) exceeded the existing record by more than two pounds and has retained the world record for more than fifty years. Perry and his friend, J.E. Page, were fishing in Montgomery Lake, a slough off the Ocmulgee River, not for trophies but to bring food to the table during those days of the Great Depression. The fish was caught on a Creek Chub Perch Scale Wigglefish, Perry`s only lure, and was 32 1/2 inches in length and 28 1/2 inches in girth. The weight and measurements were taken, recorded and notarized in Helena, Georgia and Perry’s only reward was seventy-five dollars in merchandise as first prize in Field and Stream Magazine`s fishing contest. The longstanding record is one of the reasons that the largemouth bass was made Georgia`s Official State Fish. Montgomery Lake is today part of the Department of Natural Resources Horse Creek Wildlife Management Area.

A largemouth weighing in at one more ounce (22.5 lbs.) was caught by Manabu Kurita in Japan in 2009, but since it doesn’t weigh at least two more ounces than the existing world record, it’s considered a tie. Perry’s record is in no danger of being forgotten. 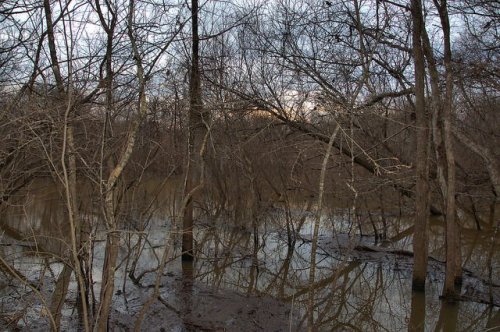 Today was the first time I’d ever laid eyes upon this place and in appearance it was scarcely different from numerous similar places I’ve photographed all over South Georgia in the past seven years. But the history of George Perry and the world record Largemouth Bass gave me pause. It made this place a tangible landmark.

For a third consecutive winter there’s high water on the Ocmulgee. The fishing must be good. Stave’s Landing is publicly accessible at the end of a dirt road about three miles in length. The road is generally safe for travel, though a four-wheel drive is the best way to go.

I look forward to returning in the spring. 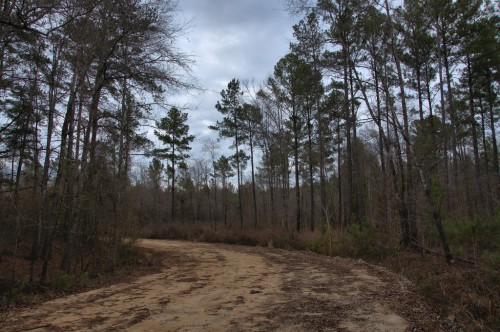 There are many references to George Perry online, but this is one of the best. 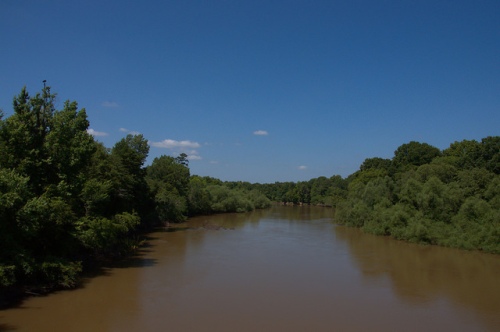 This afternoon, I had the pleasure of attending a talk about the fiction of Brainard Cheney at the Glennville Public Library. During the 1980s, Stephen Whigham recognized the importance of Cheney’s works set around the Altamaha, Ocmulgee, and Ohoopee Rivers during the late 19th century and has now brought them back into print after decades of obscurity. Lightwood, River Rogue, This is Adam, and Devil’s Elbow recall the lore of the river and the river people long gone from the landscape.

Brainard Cheney was born in Fitzgerald in 1900 and moved to Lumber City by the time he was six years old. Upon the death of his father at age eight, he and his sisters were raised by their mother. He attended the Citadel during his teen years and later, at Vanderbilt was a student of John Crowe Ransom and a roommate of Robert Penn Warren. Ransom and Penn Warren were the best-known members of the Fugitives. From 1925-1942 he worked for the Nashville Banner. (Other contemporaries were Andrew Nelson Lytle, Caroline Gordon, and Allen Tate).He and his wife Frances, herself the author of a widely-used textbook of library science, converted to Catholicism in the 1950s and became close friends of Flannery O’Connor’s. From 1952-1958, Cheney was public relations director for Tennessee Governor Frank Clement. He died in 1990 at the age of 89.

If you’re interested in the history of these rivers or the folklife of the region, I think you’d enjoy these reprints, and Stephen Whigham’s accompanying work, The Lightwood Chronicles: Being the True Story of Brainard Cheney’s Novel Lightwood. I really can’t say enough good things about how lucky we are to have renewed access to these works and the dedication of someone who believes in the literature of his region. It’s not just fiction, it’s the culture of a people nearly as gone as the Creek and the Cherokee… 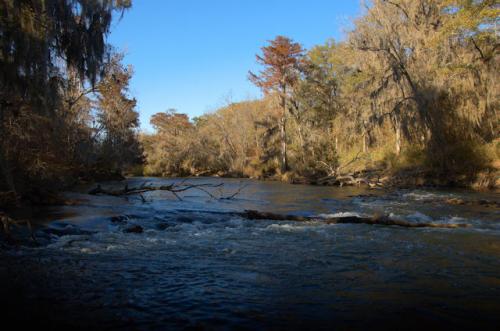 Water seems to be a common theme in South Georgia this week. With February rainfall totals breaking records which have stood in some areas since the 1870s, nearly every river in the region has swollen far beyond its banks.

This post illustrates Little River, an oxbow of the Ocmulgee near Poor Robin Spring in Wilcox County. The stream’s current here is amazingly fast, more like a stream in the Piedmont than in the Coastal Plain. 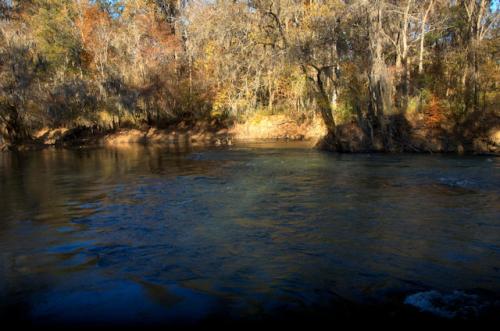 Thanks to Bruce Greene for giving me access to the property.

In 1982, Dr. Delma Presley, a professor at Georgia Southern organized Project R.A.F.T. as a way to honor the memories of the men who floated timber down the Ocmulgee and Altamaha Rivers in the early part of the 20th century. R.A.F.T. was an acronym for Restore Altamaha Folklife Traditions. The project, which was centered here at McRae’s Landing, was a huge success and was coordinated with folklife festivals along the river. Author Brainard Cheney, a native of Fitzgerald who had written several popular novels about life on the river was also active in the project and spoke at numerous locations along the route. I wrote to Dr. Presley about his book Okefinokee Album (still in print!)and his work with Project R.A.F.T. when I was still in high school and he sent me a video tape and souvenir program of the project, which was my first exposure to local documentary work. I finally got to meet Dr. Presley in 2011 at a presentation to the Long County Chamber of Commerce and  he still has fond memories of this project, especially of the last raft pilot, the late Bill Deen. Dr. Presley himself is quite an accomplished scholar and was one of Georgia Southern’s most popular professors, combining his passion for literature with a passion to preserve and document the rapidly vanishing folk culture of Southeast Georgia. In fact, he’s been compiling research on the human history of the Altamaha River for over thirty years. He was also instrumental in establishing the Georgia Southern University Museum.

Text on Monument: On April 3, 1982, Piloted by Captain Bill Deen, Age 90, the Last Raft of Georgia Pine Timber Began a Journey of 140 Miles Down the Ocmulgee and Altamaha Rivers to the Coastal City of Darien, Georgia. Smaller than the Great Rafts of the 1880s, the Raft of 1982 was 85 by 30 Feet and Weighed Almost 50 Tons. Oar Sweeps of 35 Feet Were at Each End. After Stopping for Folk Festivals Near Baxley and Jesup, the Raft and a Crew of 8 Arrived in Darien on April 20. The Rafthands of 1982 and Today Honor All Who Know and Love Our Rivers, Land, and People. 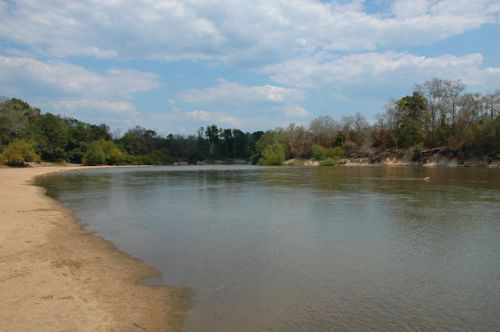 The landing here at the Jacksonville Bridge has been recently closed. I made these shots when the river was exceptionally low, so much so that the wood pilings from the old bridge are visible.

Some sources have listed the date of construction for this landmark as 1916; 1928 is the accepted year per the construction records of the Virginia Bridge & Iron Company. The style is known as “through-truss”  and this is one of just a handful of surviving rotating bridges in Georgia.

Tina Clay recalls: My grandparents lived on the Jeff Davis side of that river until the road was widened in the 80’s. They owned the land up to the river. My grandmother actually watched that bridge being built. It was prior to the bridge for auto travel when there was still a ferry in operation. I also lived there until I was 8 (when the road was widened). The train trestle was actually made to turn and rotate to allow larger ships passage down the river. That was one of the main reason to have someone on lookout. They also kept carrier pigeons up there and used them to communicate up and down the river. 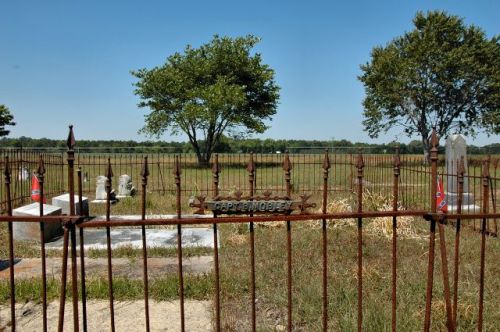 This is the Mobley Cemetery, burial place of Captain Byrd Mobley (16 October 1850-27 November 1925) and his family. Because the gravesite has always been marked with a Confederate flag, I assumed that Captain Mobley had been involved in the Civil War. But upon further study I realized this was very unlikely to be the case. He would have been just fourteen years old at the end of the war. I have been unable to locate him in any regimental histories.

This area along the Ocmulgee River, at the Ben Hill County Public Boat Landing, is known as Mobley Bluff. Carlton E. Morrison’s invaluable history, Running the River: Poleboats, Steamboats & Timber Rafts On the Altamaha, Ocmulgee, Oconee & Ohoopee, confirms that Captain Mobley had indeed piloted a passenger steamboat known as The Cumberland for W. A. Willcox. The Cumberland made regular runs between Hawkinsville and Darien in the 1880s and 1890s. For those interested in the history of river life in South Georgia during the latter half of the 19th century, Carlton Morrison’s Running the River is a treasure trove.

Bloodroot (Sanguinaria canadensis) has been used by Native Americans for hundreds of years as an emetic and respiratory aid. as well as a dye. It has also been used in quack medicine and in recent years has been banned from use in many products due to its carcinogenic properties.