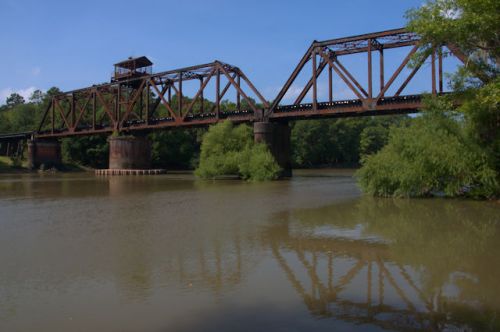 Some sources have listed the date of construction for this landmark as 1916; 1928 is the accepted year per the construction records of the Virginia Bridge & Iron Company. The style is known as “through-truss”  and this is one of just a handful of surviving rotating bridges in Georgia.

Tina Clay recalls: My grandparents lived on the Jeff Davis side of that river until the road was widened in the 80’s. They owned the land up to the river. My grandmother actually watched that bridge being built. It was prior to the bridge for auto travel when there was still a ferry in operation. I also lived there until I was 8 (when the road was widened). The train trestle was actually made to turn and rotate to allow larger ships passage down the river. That was one of the main reason to have someone on lookout. They also kept carrier pigeons up there and used them to communicate up and down the river. 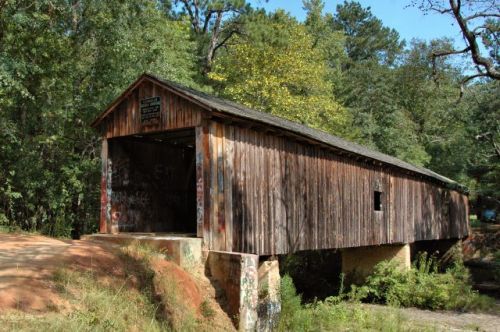 Built by J. W. Baughman in 1891, this 121-foot span over McDonald’s Ford was restored by John Cherry in 1984. It is the southernmost covered bridge in the United States. Baughman’s grandson, J. W. Baughman III, writes that he was born in 1861 in Lexington, South Carolina, and died in 1923 in Dothan. Iron gates have now been placed at both ends of the bridge due to graffiti and other damage to the bridge.