This marble-front commercial block is one of the nicest historic retail buildings remaining in downtown Cordele. Its condition is probably not good, but hopefully, it can be saved. Watt and Holmes was one of the most successful businesses in early-20th-century Cordele. It was last home to an Allied Department Store. 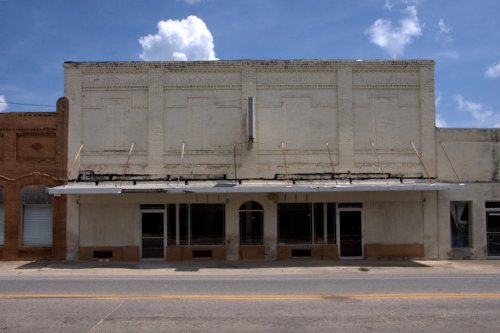 This was most recently home to Lott’s True Value Hardware. I imagine it was a hardware or department store prior o that.

This structure had a long history as a hardware and furniture store and after sitting empty for a long time was recently purchased by Moultrie native Sam Null. I had a nice conversation with Sam about his decision to move his business, Heritage Embroidery, from Moultrie to Doerun. The company does custom promotional items for customers throughout the Southeast and plans to expand. 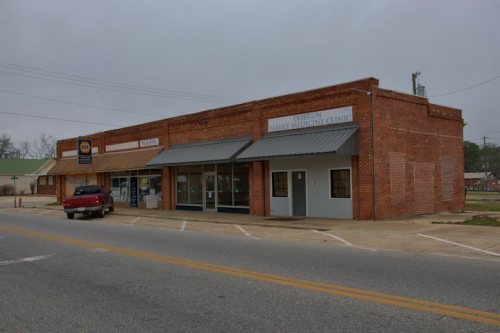 West Broad Avenue is the main commercial area of Doerun. 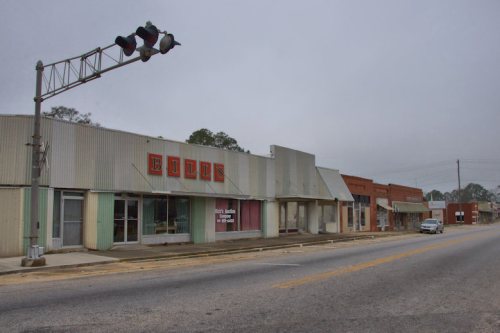 Typical early 20th-century storefronts, including banks, general and grocery stores, and hardware stores, survive in varying states of repair. Locals are optimistic that some of the unoccupied examples will be saved and repurposed.

One business still open on Depot Street is Abbeville Builders Supply. In the age of big box hardware stores, this is a miraculous survivor.

The Mission Revival style saw its greatest popularity between 1890-1915. Once relatively popular in South Georgia, few examples survive in good condition. I don’t know if this was always a hardware store; the Ace sign likely dates to the 1970s, indicating it was open until at least that time.

The building on the left served for many years as Marion Drugs. The Charles M. Clements building is on the right. It served as a hardware and furniture store as well as the local undertaker. Downtown Buena Vista is nice little town with generally well-preserved early 20th century commercial storefronts, dominated by one of Georgia’s older courthouses in the center of the square. Below is the Clements Hardware Store from the side, showing its old Coca-Cola mural.

Shea Browning identifies the buildings here as (L-R): Georgia Power, Tri-County Gas, Larry Welch Attorney at Law, and Haskins Hardware, though some are now vacant or have different tenants.

This was the lumber and building supply warehouse for J. C. Hodges Hardware.

These two slightly different perspectives of Fleetwood Avenue show the commercial heart of what was once a thriving town. Though Willacoochee is still an active community, its historic business and residential core was divided and forever altered by the widening of U. S. Highway 82. Still, it has great residential and commercial areas and I hope it’s listed on the National Register of Historic Places in the future.

Here are some poignant thoughts about Willacoochee from the late Cranford Sutton, a native son and longtime local educator: When I was growing up in the 1940s and 1950s, it was pretty self-contained, the center of the universe. We had two train lines running through here…twenty-four hours a day. Our downtown storefronts were the old-fashioned brick fronts with plate-glass windows that turned inward, inviting you in the door…I would park the pickup truck downtown at two o’clock on Saturday afternoon just to have a parking place on the front street, because by dark everyone from the surrounding countryside had come in to buy their groceries and visit. It was a huge gathering…

Highway Corridor Z (U. S. Highway 82, ed.), as they call it, goes from Columbus, Georgia…to Saint Marys, Georgia…This four-lane highway came through all these small towns and destroyed their serenity and safety…All the problems now faced by Willacoochee and other small towns along Corridor Z could have been prevented if our city, county and state officials back in the 1970s had possessed wisdom and foresight.

I see in the future a revival of these wonderful small towns. I envision an exodus from the sprawl of today’s traffic-choked cities to places like Willacoochee, where walking or biking to the post office, to the grocery store, and to visit others is safe and revitalizing…

I also agree with him on that. Willacoochee truly is one of the most attractive small towns in South Georgia and has a lot of undiscovered potential. Locals know how great it is, but the outside world would be wise to take a look for themselves. I’d really like to see the community work to be listed on the National Register of Historic Places.

Willacoochee was founded in 1889. Originally known as Danielsville, for a pioneer family in the area, its current name in honor of the river running to its west is thought to be a Native American term for “home of the wildcat”. It’s also home to the No Name Bar, made famous in the essay by Lewis Grizzard. The original bar has been replaced by a more modern structure, but remains a popular watering hole and music venue.