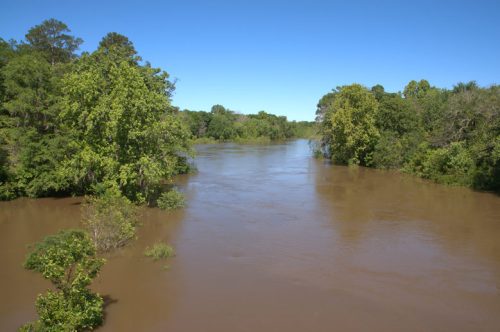 In a bend of House Creek just off the Ocmulgee River near the Wilcox-Ben Hill County line is a place known to locals as Spring Lake. Or more likely, Mr. Guy’s or Uncle Guy’s place. There’s a blue spring, or boils, on the property, which actually gives the “lake” its name. It’s a legendary hunting and fishing spot, and though many know of its reputation, only those who have been lucky enough to know the family have experienced it first hand. [I’m grateful to Ken Fuller for the following history. Ken has a passion for the place and its history and I am most grateful to him for the opportunity to photograph this local landmark and share these photos. I have known members of the Fuller family most of my life, but only met Ken recently. A retired Methodist minister, he was filling in for the pastor at my family’s church a couple of weeks ago. He suggested that I come out and see the place, as a small addition was planned for Guy’s cabin and if I wanted to see it in its original state I best do so quickly. My parents and I had a wonderful visit, though I didn’t get to visit the boils on this trip]. 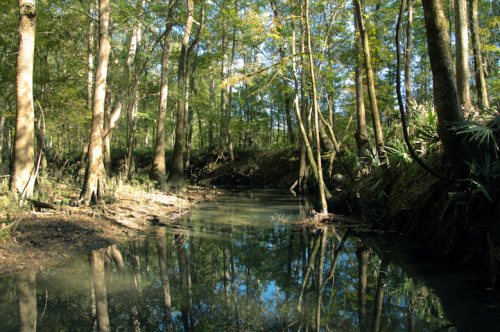 This place came to Fuller ancestors through a land grant in the early 19th century and at varying times they’ve used it as a dwelling place and recreational retreat. Because they’ve always recognized it as a natural treasure brimming with all the bounty that provides, it has changed very little over nearly two centuries of their ownership. Ken Fuller notes: I doubt I will ever take the time to try to run it down, but it feels like nearly, if not all, the property from south of House Creek to Abbeville, east of the Ocmulgee, was land grants in 1832 or there about when the treaty was signed with the Indians ending hostilities. The Wilcox brothers, Gen. Mark and Capt. Thomas, and George Reid were major land holders. John Wilcox III and his sons manned 3 forts on the East side of the Ocmulgee before the treaty was signed.

The property is indelibly associated with Guy Fuller today because he built this tiny cabin as a residence in 1933 and chose to live out his days committed to the simple life here. Guy T. Fuller was the fourth of five children, born less than ten miles away at Sibbie in 1895, to Andrew Wade and Celia Elizabeth Reid Fuller. When he died in 1984, he was buried alongside his parents and siblings at his mother’s family cemetery near his birthplace.

His favorite teacher as youngster in Sibbie was John Moye, no doubt of the old-fashioned headmaster variety. He also attended Providence School in Ben Hill County, Georgia Normal College in Abbeville (Class of 1919), and then the University of Georgia. Ken Fuller is inspecting his Georgia Normal College diploma in the photo below.

After one year of teaching, Guy spent time in the European theater in World War I, and upon returning home was determined to carve out a life for himself as a local educator. A country school teacher whose career began in the era of one-room schoolhouses, he was a lifelong bachelor with no children of his own. But nearly all the children he taught over his 42-year career thought of him as family, hence “Uncle Guy”. He freely shared his cabin and in summertime it was common for the swimming holes on the property to be full of young people.  And over the years it wasn’t uncommon for several generations of one family to have been entertained here. While one might draw the conclusion that a man living such an isolated life was an eccentric hermit, his love for people proved just the opposite.

Perhaps an indication of what a genuinely good man he was, Guy Fuller loved teaching so much that he broke barriers of his day by teaching African-Americans to read and write. He told Macon Telegraph columnist Bill Boyd in “A City Slicker Visits Paradise” (3 June 1979): No one wanted to teach the Negroes, so I volunteered to hold classes two nights a week. Some of them walked five miles to come to class. And if I stayed until 2 A.M., they stayed too. They ranged in age from 10 to 76, but by the time school was out all of them could write their names and some were reading from the primer…May sound strange, but that was the most rewarding experience of all my years in the classroom.

Ken writes: The little log cabin was built by our grandfather “Papa Fuller” for his wife “Mama Fuller” so she would have a private cabin. It had a small kitchen off the back with a short covered walkway to it. We children slept in it a lot. Mama Fuller had a terrible allergy to pepper that made arthritis so painful she could not move. A trip to Piedmont Hospital discovered the allergy and when the Dr. took her off pepper she totally recovered and she drove home the new Chrysler Papa Fuller bought and left in the parking lot for her. She had an accident, I was told, that left her with a stiff leg. After that she seldom went to “The Creek” until later in life when her children were grown. After Mama Fuller’s death, it seems that Guy may have used the log cabin as a bunkhouse for the many children that often visited. 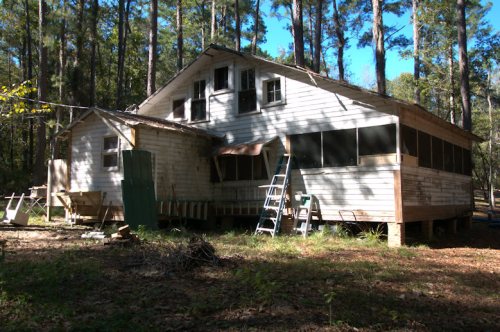 Before Guy Fuller built his cabin, there was the Spring Lake Fishing Club House. The Craftsman cabin, complete with sleeping porch, is retaking its place as the center of activity on the property. Ken Fuller shares some of the background: Papa Fuller, Drew Cleveland Fuller, best known as “D.C.” and Drew, had the Fuller Lumber Co. in Ocilla, inherited from his father, Papa Fuller. Drew died in October, 1937 before I was born in January, 1938.
Papa Fuller was an Irwin County Commissioner when he died. Can’t remember knowing when he was elected nor how long he served. The Spring Lake Fishing Club probably came from that popularity. My dad was born in 1916 and as a lad of 8 he spent summers up there alone for months at a time. Papa Fuller had a cabin out on the hill a bit away. If you remember the entrance road where it turned to go to Johnny Stokes cabin, Papa Fuller’s house was there – the old well can still be seen, tho it’s covered up. It was there when he died. A number of old cabins were there over the years, but mostly, before 1900, it was a camping,  fishing place.
Grandpa Fuller, my great-grandfather (Rev. A. W. Fuller), would load the whole family, with cousins, into covered wagons pulled by teams of white horses, and all would go for a week or more, and camp. Uncle Guy and Drew were brothers. Sibbie is named after Sibbie Wilcox Reid, Grandma Fuller’s (Celia) mother.
I doubt I will ever take the time to try to run it down, but it feels like nearly, if not all, the property from south of House Creek to Abbeville, east of the Ocmulgee, was land grants in 1832 or there about when the treaty was signed with the Indians ending hostilities. The Wilcox brothers, Gen. Mark and Capt. Thomas, and George Reid were major land holders. John Wilcox III and his sons manned 3 forts on the East side of the Ocmulgee before the treaty was signed.

Presently, the club house, along with Guy’s cabin, is being restored by Ken and Drew Fuller.  The work in the club house has been ongoing for some time. The floors have been completely replaced, as the old ones had rotted beyond repair. New window sills and door jambs have been added and other structural improvements, such as re-framing the fireplace, have been completed. 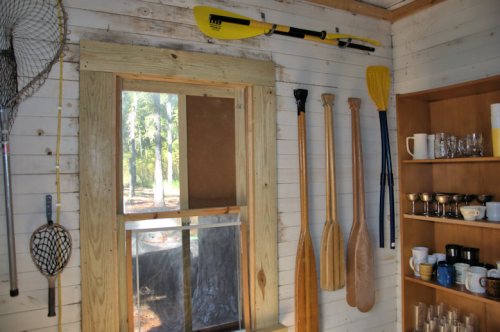 The club house has always been a sportsman’s lodge, serving family and friends for over a century.

The property isn’t accessible to the public, so I’m thrilled to have been able to visit. I spent many summers visiting some of the family’s adjacent land and have always loved the area. It was a magical place to me as a teenager and it’s encouraging to know that it will be preserved for generations to come.

As a boy fascinated by occasional visits to the Okefenokee Swamp, I was in awe of the name Hamp Mizell (1884-1948). Dr. Delma Presley told stories of his legendary two-mile swamp holler in Okefinokee Album [this recording is of another famous swamp family, the Chessers].  Coincidentally, I knew his daughter Montine Mizell Mathhews, whose husband Harold worked with my father on the railroad, but did not know at the time that she was a Mizell. I regret missing the opportunity to talk about her father with her.

It was wonderful to visit Suwannee Lake, on the edge of the great swamp, since it has always been associated with Mr. Mizell. It’s not a big fishing hole, but nonetheless revered by fishermen in the know. Judging from satellite images, I believe it’s an oxbow of Suwannee Creek which runs from the west into the swamp. A. S. McQueen noted in his History of Okefenokee Swamp, 1932: [Mizell] is the owner of the beautiful Suwannee Lake, on the north side of the Okefenokee Swamp, one of the most famous fishing places in Georgia. A record was kept of the fish caught in this lake, and one season, 41,618 fish were caught by the hook and line method. During one day 35 fishermen caught 1,471 fish by actual count. 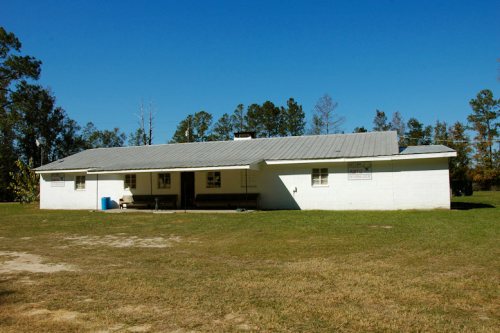 On the edge of the Bulltown Swamp where Long, McIntosh, and Liberty counties meet, is this cinderblock clubhouse. Though the structure dates to 1956, a group of men from Portal, Georgia, started the Portal Hunting Club in 1900. It’s one of the oldest hunting clubs in Georgia [maybe the oldest]. 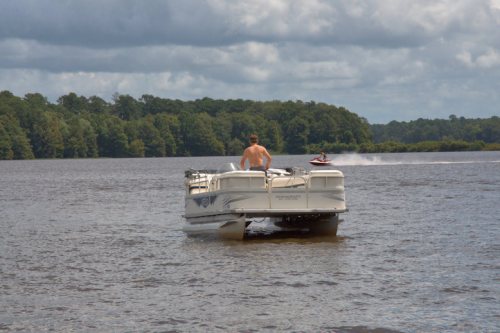 At just 20 miles in length and a mile wide at its widest, Lake Blackshear is one of Georgia’s smallest man-made reservoirs. It’s essentially a wide spot on the Flint River but it’s among the most popular outdoor recreation areas in South Georgia. To my knowledge, it’s also the oldest major man-made lake in Georgia, created with the damming of the Flint River between 1925-1930.

Pleasure boating and water skiing are extremely popular, as is fishing. There’s a busy put-in at Lakeshore Marine on the Sumter County side. Besides a ski shop, marina, campground, and event space, there’s the Lakeshore Grill which sells food, tackle, coolers, beer, gas and other essentials. Georgia Veterans State Park is a mile or so from here and is the primary location for public access to the lake. If you’re in the area, stop at Stripling’s for some of the best sausage around.

Brothers Dan and Ed Giles, whose family has farmed the surrounding countryside for over fifty years, have transformed this historic home into the Pine Ridge Plantation lodge. They have modernized the space while maintaining its historic integrity and the plantation has quickly become one of the premier hunting destinations in Southwest Georgia. Though sometimes spelled ‘Ingram’, old timers from the area have written that it was spelled ‘Engram’.

This was located in an antique store window in downtown Edison.

Lamar Sanders writes: This was the old American Legion building that has been there since my memories of the 1950’s. We had square dances, senior proms, and family reunions in this building. 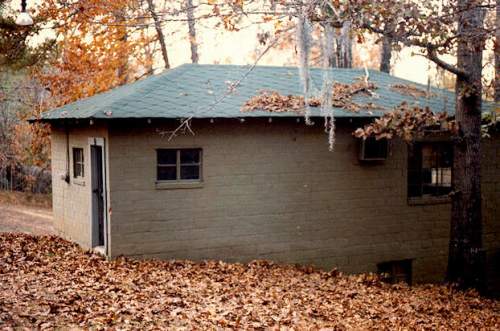 Jan Stokes notes that Charlie Newcomer, Sr., built this hunting cabin on Spring Lake Creek in the early 1940s and it’s still in use today. Spring Lake Creek is a tributary of the Ocmulgee River near the Wilcox-Ben Hill County line and is fed by one of several springs in the area. I spent many holidays here in my youth swimming and exploring the surrounding woods. The spring-fed water was so cold that we cooled our watermelons in it.  I made this photo in 1986. 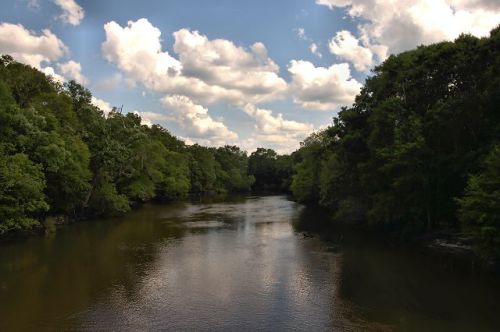 Oliver Landing is a great place to access the Ogeechee.