Thanks to Brenda Ambrose Lockerman for the identification. Beth English shared this history from an early illustrated promotional booklet about Dooly County: J. O. Hamilton has always lived in Dooly County, reared on the farm and educated at Mercer University. He has been in business in Vienna many years; married Miss May Holmes and they have a lovely family of five children. Their home is one the corner of Union and Fifth Streets, and is a palatial one indeed. Mr. Hamilton is the president of the Bank of Vienna and is a cotton buyer and does a large stock and buggy business. He has been mayor and councilman of Vienna and is Chairman of the Democratic Executive Committee of Dooly County. He is one of the solid business men of the State and takes a keen interest in every move that tends to build up the city and enjoys the esteem and confidence of all of his fellow citizens. He is modest and conservative and is one of the most useful men of Vienna. 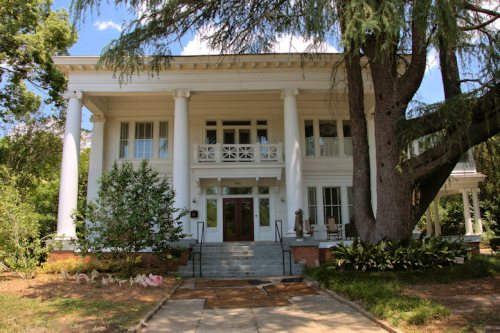 This landmark of the Neoclassical style was built by Dr. C. T. Stovall after “Whitehall”, his previous home at this location, burned. Stovall was Vienna’s primary physician for many years, in addition to serving as the city’s first treasurer and eventually alderman and mayor.

In 1914, he sold the home to Walter F. George, who was then serving as the Superior Court judge for the Cordele Circuit. George was elected to the United States Senate in 1922 where he would serve as one of its most influential members until shortly before his death in 1957. He sold the house in 1924. 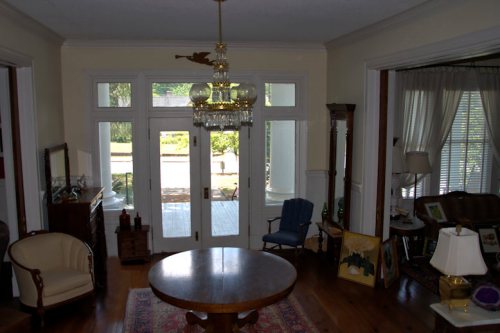 Subsequent owners were the L. L. Woodward family, Georgia Supreme Court Associate Justice Hardy Gregory, Jr., and his nephew, Bert Gregory. Mr. Gregory graciously allowed me to photograph the house, which he is preparing for sale. 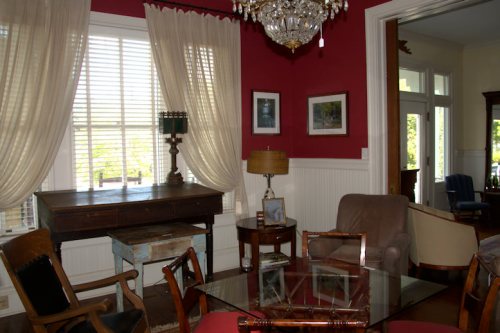 It’s been a wonderful showcase for Mr. Gregory’s numerous collections and served as his law office. The desk in this photograph came from the old Cordele depot.

A sun room over the porte cochere is an interesting feature. 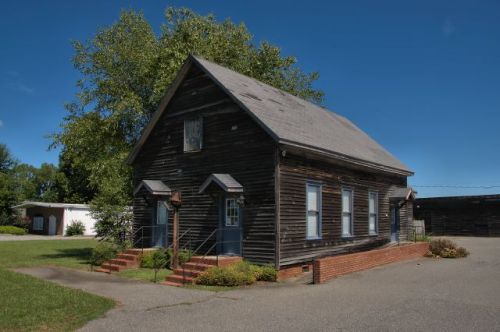 Just off I-75 at the Vienna exit you’ll notice this structure, which now serves as the Georgia State Cotton Museum. It’s a really small museum, but provides a great link between the historical importance and continued prominence of cotton in Georgia.  The building originally served as the rural Smyrna Schoolhouse (Circa 1890) and was moved here and renovated. 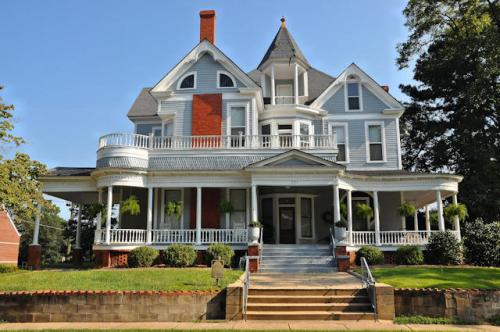 This is among the grandest homes in Vienna, which has a wonderful historic district full of surprises like this one. It was built by P. G. McDonald from timber cut at his Dooly County farm. In the years following, it was owned by longtime Vienna mayor Jack DeLiesseline and his wife Ethyl, who was a well-known poet and camellia cultivator. It was purchased in 1976 by the Couch family, who have beautifully maintained and restored it ever since. Thanks to Laura Couch Fokes and her delightful mother, Diane Couch, for sharing the history of this special place. Diane’s love for the house and its history is truly inspiring.

Claire DeLand writes: The home has always been known as “Rose Hill” by the family. It was…the family home of the McDonalds. Ethel McDonald married John Thompson (Jack) DeLiesseline, a native of Charleston, SC., on June 18th 1912. They lived in Atlanta for quite a while and Jack was the Southeastern District Manager of the Remington Typewriter Company.
It was after he retired that they moved to Vienna to live in the family home [of] Ethel and her sisters – Vera Claire McDonald Shipp, Lilla Mae McDonald Ketchum, and her brother Middleton McDonald. Jack was elected Mayor and served for a number of years in that position. Ethel taught piano, voice and violin. She wrote several books, and was Poet Laureate of the State of Georgia. Her gardens were gorgeous places of peace and loveliness, and she started several new Camellia varieties over the later years of her life. She was my Great Aunt and I spent many wonderful summers with her and Uncle Jack at Rose Hill.

Gothic design was all the rage in Vienna in the first decade of the 20th century, at least on Church Street. This beautiful structure, as well as the Methodist church just a couple of blocks away, are two of Vienna’s most architecturally significant houses of worship. This congregation was organized in 1836 as Providence Baptist Church and renamed First Baptist Church of Vienna in 1890. 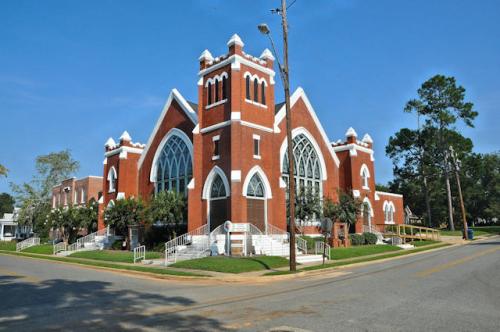 Formed in 1849 as the Vienna Episcopal Methodist Church, Vienna United Methodist Church is today located in this beautiful Gothic Revival landmark. It’s the third location to house the congregation.

This was restored by the Vienna Historic Preservation Society and is now used as the Vienna Cultural Center.

This was erected on the grounds of the Dooly County Courthouse by the Georgia Vocational Association in 1950, when George was one of the most powerful men in the United States Senate. It was likely a favor to Senator George for his support of federal funding of vocational programs in American high schools. 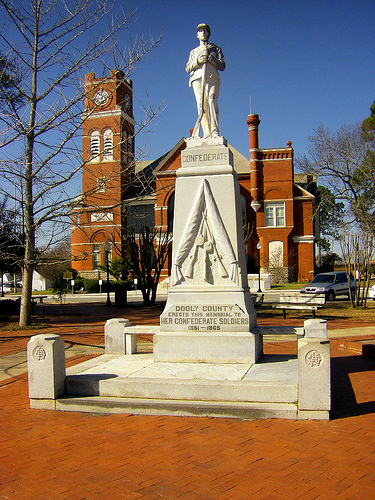 Vienna’s Romanesque Revival courthouse was completed in 1892. It originally featured a spire, which was later removed due to structural concerns. William H. Parkins was the architect. The confederate monument was dedicated by Dooly County’s surviving veterans and the Vienna United Daughters of the Confederacy Chapter 1097 on 26 November 1908. The kepi on the soldier is a rare authentic feature absent from most confederate monuments, but nearly as rare is the fact that a woman was the principal speaker at the dedication. Miss Mae Forehand was a rousing orator, according to accounts of the day.