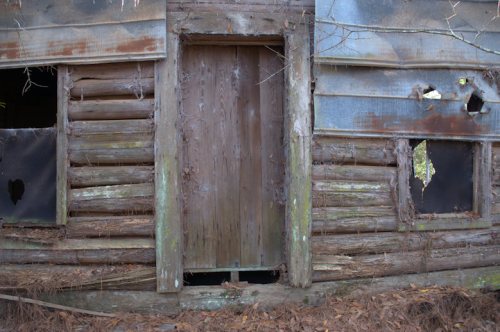 This amazing survivor was built as a single-pen log residence in the 1850s by area pioneer David Reddish (1824-1902). Thanks to Mr. Reddish’s great-great granddaughter, Amanda Farmery, for bringing this highly endangered pioneer home to my attention. Mr. Reddish lived in the house until his death in 1902. 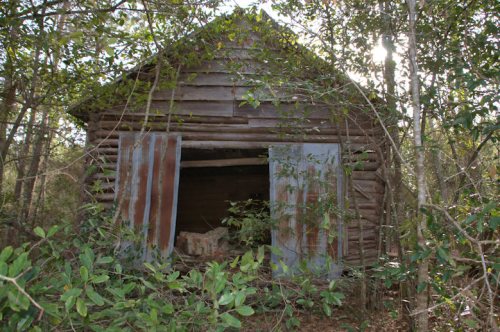 The hearth was located on the end pictured above and has collapsed and some of the brick was salvaged or removed. 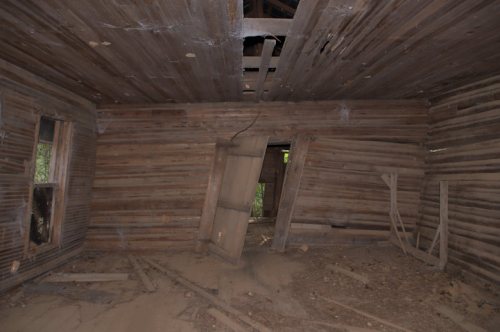 This view of the interior illustrates the condition of the house, which is so compromised that I wouldn’t even step inside. 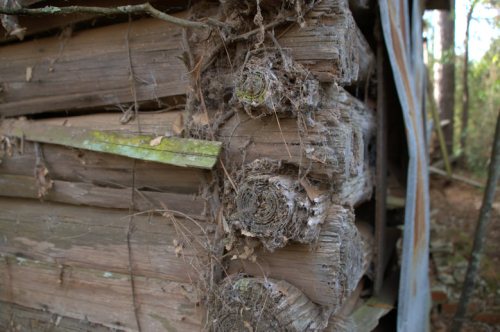 Typical of construction of this era in Georgia, the logs are held in place by dovetail joinery. 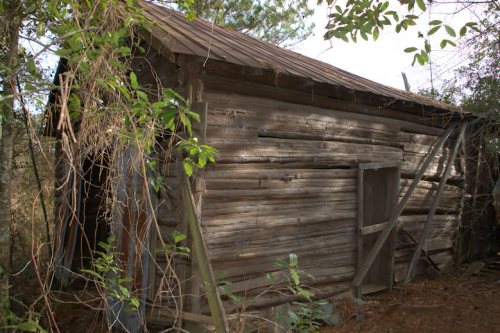 A rear view of the original section of the house illustrates just how utilitarian structures of this type tended to be in early rural Georgia. 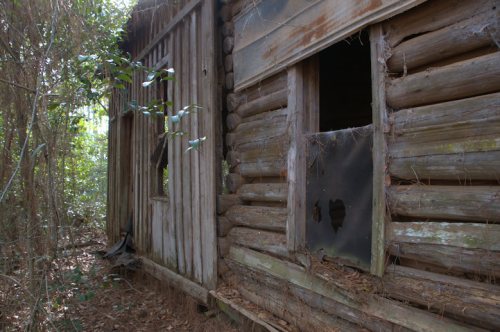 At some point, a board-and-batten addition was made to the house. It’s possible that this was done after Mr. Reddish’s death. Amanda Farmery notes that a well on the property displays a date of 1912, suggesting it continued to be used a residence for some time. 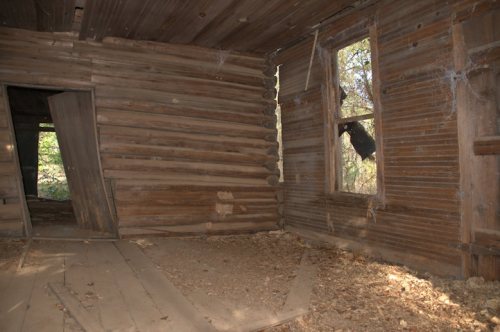 This view from the board-and-batten addition looks toward the original single-pen log section. 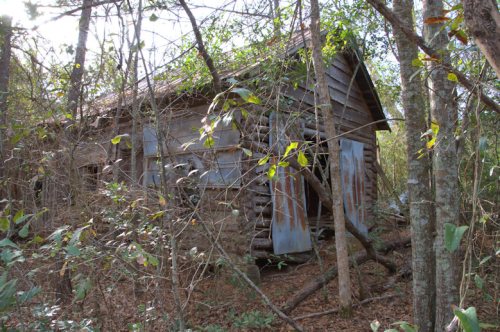 Though there is likely no hope for saving the structure, it is wonderful that the family has allowed to stand all these years. I am very grateful to Amanda Farmery for not only recognizing its importance to her family history but her desire for documenting it and sharing it for posterity’s sake. 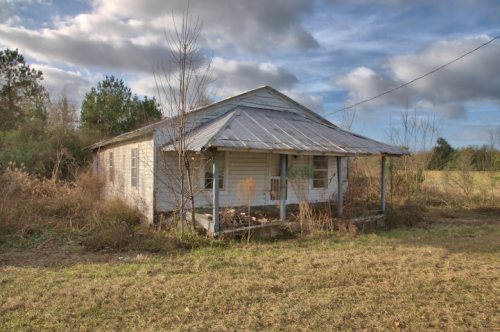 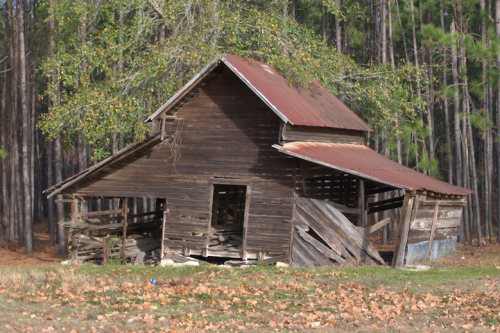 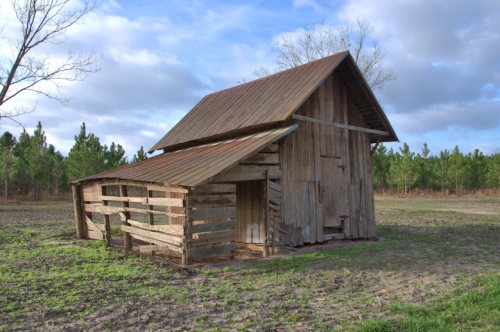 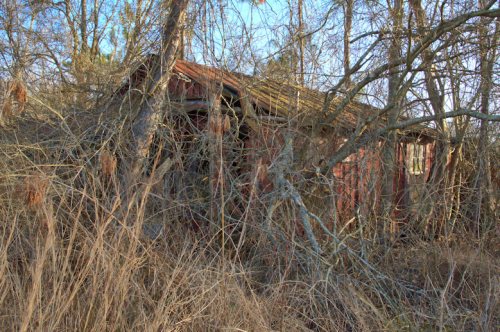 This is about as good a view as can be had of this shotgun house in northwestern Wayne County. It’s located in the vicinity of Tetlow, which still exists on the map and in a nearby road name, but seems lost to history otherwise. Because there are the remains of several nearly identical shotgun houses at the site, I presume this was a turpentine camp at one time. The area in which its located was heavily involved in the naval stores and timber industries throughout much of the twentieth century; the camp was likely abandoned by the 1960s. 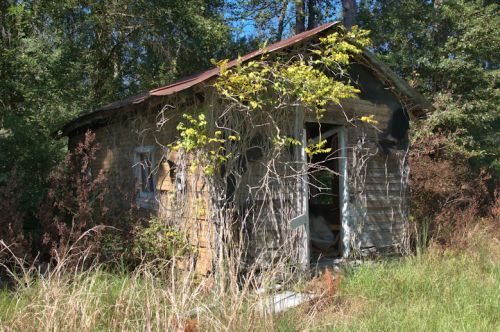 This is located near the railroad line between Odessa and Gardi and considering the prevalence of the turpentine industry in the area, it was likely related to that. Thanks to Jackielee Moseley for assistance in the identification. 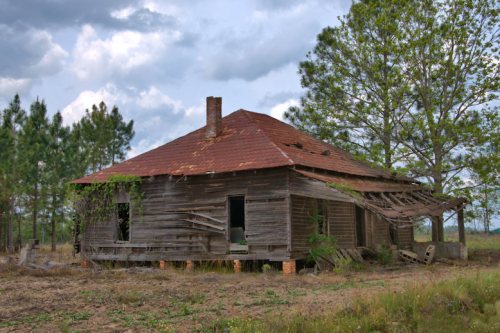 I’m not sure when this was built, perhaps the late 1930s or early 1940s, but I believe it was built solely for use as a boarding house/tourist home. It is presently being deconstructed. Jesup once had many such “tourist homes” but by the 1960s most were replaced by modern motels. The Broadhurst Studio postcard (pictured below) likely dates to circa 1945-1950. The card notes the availability of a locked garages and boasts that it is a block away from the noise of highway traffic. 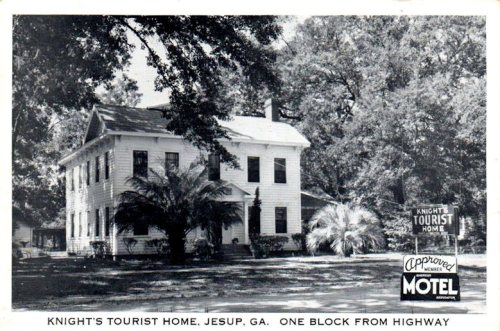 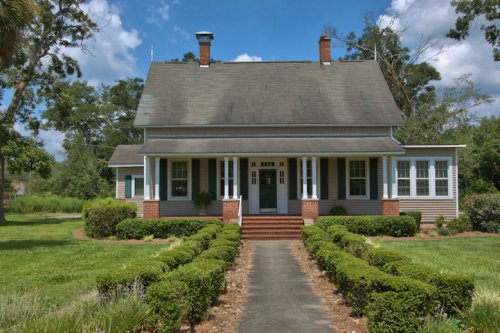 Willis Clary established what would become Jesup at Station Number 6 on the Atlantic & Gulf Railroad line in early 1869. He paid to have the town surveyed and built this house on City Lot #1, presumably around the time the survey was done. Clary would serve as Jesup’s first mayor. As he and wife Lucinda Hall Lee had no children of their own, his stepdaughter, Georgia Lee Whaley, eventually inherited the home. 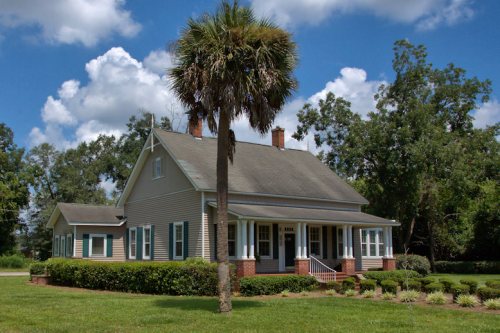 It appears to have originated as a simple central hallway structure. Expanded over the years, it’s presently used as an office. 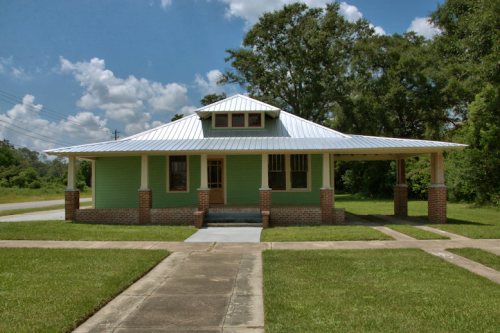